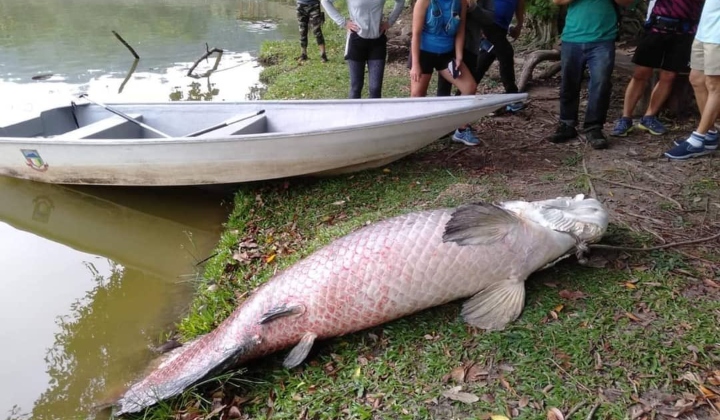 Morning joggers at Tun Fuad Stephens Park in Bukit Padang, Kota Kinabalu, had the shock of finding a monster fish, the size of a BOAT, floating in the lake there today (Aug 8).

Photos of the dead seven-foot long fish has been circulating online since its discovery at 6.30am this morning – surprising Malaysian social media users, due to both its size and species.

The giant fish was identified as an arapaima, a fish found only in South Americaâ€™s Amazon.

Weighing at least 100kg, it was eventually hauled to shore.

Kota Kinabalu mayor, Datuk Nordin Siman believes the fish was likely discarded into the lake when it was still young and had lived there for many years with the local fish.

While locals speculate that the fishâ€™s cause of death was due to poisoning, Nordin said it was most likely due to old age.

According to him, the Fisheries Department had been called in to investigate the fishâ€™s cause of death.

â€œThe Borneo Marine Research Institute at Universiti Malaysia Sabah will also be doing some research on the fish,â€

The arapaima, a.k.a pirarucu in Brazil or paiche in Peru is one of the largest freshwater fish in the world. Native to South Americaâ€™s Amazon, it can grow as long as nine feet (2.75 meters) and weigh up to 200 kg.

Arapaimas can stay underwater for up to 20 minutes. However, they tend to remain near the water’s surface, as their primitive lung requires them to emerge and breathe air.

Due to this, they often hunt just beneath the waterâ€™s surface, feeding mainly on fish and the occasional bird making the mistake of flying too close to the lakes.

Considering the fact that the arapaima tends to swim close to the surface, this begs the question on how it was never noticed in the lake prior to its death.