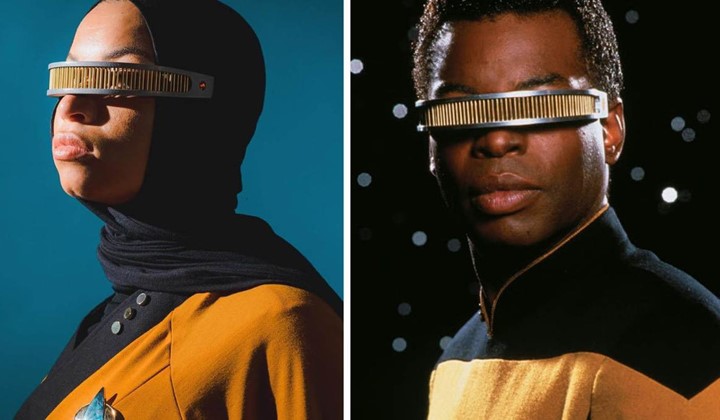 For those who don’t know what Star Trek stands for, Gene Roddenberry presented his vision of the future: a utopia where humans have gone past the need for greed, war, or money.

He also focused on showcasing diversity in the TV shows. Much of the show’s themes focused on inclusivity, learning about (alien) races, and respecting differences.

Which is why, when historian Blair Imani added a hijab to her cosplay of Lieutenant Commander Geordi La Forge from Star Trek: The Next Generation, the fandom rose up to support her against the usual internet trolls.

Some people didnâ€™t like my hijab being added to a Star Fleet uniform. Luckily TRUE FANS of @StarTrek know that diversity is KEY to Roddenberryâ€™s vision. Thank you to everyone defending me against the trolls. Lots of love 💕 pic.twitter.com/bwVgap6CfO

The actor LeVar Burton himself has given his blessing, calling it “the best cosplay ever” of his character Geordi.

Best cosplay of Geordi, EVER… courtesy of my friend @BlairImani Thank you, little Sister, you honor not only me, but all the kids out there who saw LaForge as a hero. #bydhttmwfi https://t.co/zNAVwXTwuf

Of course, anything that is in the least bit interesting on the internet draws haters, and many took to Twitter to denounce her effort, going so far as to “cite” the show itself.

The Federation rejected all religions and your beliefs are mocked as primitive by The Next Generation.

Roddenberryâ€™s trek universe didnâ€™t have religion in the federation. And all earth religions were just gone. They were a hurtle humanity had overcome. Thatâ€™s why the bad guys had religions on the show. Roddenberry saw it as something to fight against using truth and logic.

You represent exactly that Roddenberry had in mind when he created this universe. Acceptance, diversity, respect are core values and any Trek fan knows this. LLAP

So we can have people of color, people with disabilities, Vulcans and half Vulcans, Klingons, androids, telepaths, genetically enhanced individuals and genius preteens on the bridge. But we canâ€™t have a hijabi. Whatever happened to Trekkies supporting diversity?

“Are you Children of the Sun?”

“Well, if you’re speaking of worships of sorts, we represent many beliefs.”

And that’s really the perfect answer to such questions.

Blair Imani hasn’t let the hate stop her, though. She has another cosplay prepared for the Official 2019 Star Trek Las Vegas Convention, this time as fan favourite Guinan, played by Whoopi Goldberg.

Only a few days until @CorpusRen and I hit #STLV Can you tell who Iâ€™m cosplaying? Hereâ€™s a hint: Sheâ€™s a great listener and appears in @StarTrek: The Next Generation 🖖🏼💜 pic.twitter.com/ttTWzdOBEz

We can’t wait to see more of what she has to show us!

When a Star Trek cosplay makes you weep a little and reaffirms the power of Star Trek to inspire and change, you know it’s a good start to the day. Thanks so so much for this!