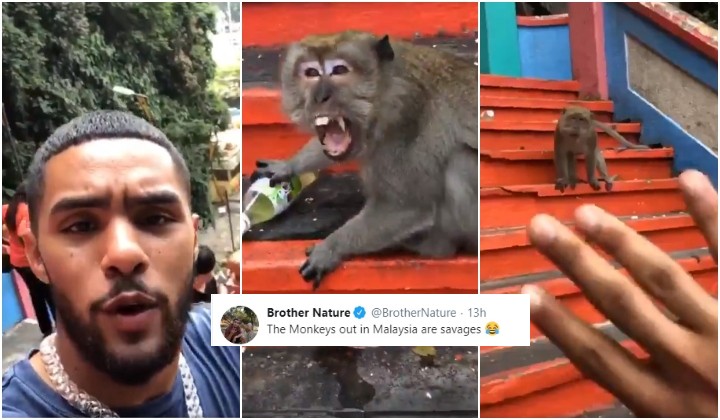 Every Malaysian knows that you should NEVER EVER MESS WITH MONKEYS.

ESPECIALLY the crazy ones that call Batu Caves their home.

But, kesian all the tourists lah. They go to Batu Caves, hoping for some culture and cool Instagram pictures.

Then, all they see is a cute, furry little creature and think that itâ€™s perfectly fine to go up to these little terrorists and play/pet/feed them.

Well, they always learn the hard way that NO, you NEVER feed the monkeys and you should run far far FAAAAR away.

Just like this American internet personality who thought it was a wise idea to go up to a thieving monkey in Batu Caves.

Kelvin PeÃ±a, aka Brother Nature, uploaded a 42-second video on Twitter of him screaming in fear as a Batu Caves macaque monkey hissed and lunged at him.

The Monkeys out in Malaysia are savages 😂 pic.twitter.com/CZeKiyp3sQ

The American, who went viral for befriending deers, walked up to a monkey who had apparently stolen a drink bottle from a vendor and tried to tell it off.

Look at these thieving monkeys. Thereâ€™s no reason why you stole this from the merchant! Imma take it back.

Clearly, the monkey did not appreciate the reprimand and lunged at Kelvin, hissing viciously.

Just like any other mere mortal who come face to face with the monkeys, Kelvin let out a blood-curdling scream and backed off quickly.

Chill, chill, chill bro!
Itâ€™s yours, you got it. Iâ€™m not trying to do the right thing!
Why are you coming after ME?? Iâ€™m just trying to help!

The video quickly caught the attention of Malaysians and non-Malaysians on Twitter, with 26.5K retweets and 92.3K likes at the time of writing.

They are always ready to fight. https://t.co/6t5UJeTJYi

brother nature in batu caves: ahaha these monkeys are WILD lmaoo they hissing at ppl and shit

malaysians, who were taught since young that the monkeys at batu caves are fucking thieving gremlins who will DEFINITELY give you rabies: pic.twitter.com/S1LoLJQL0U

Batu caves monkeys are WILD AF! I got jumped by one before and it stole my stuff😔 I didnâ€™t try fighting back bc it was 3 against 1 yâ€™all https://t.co/JCsLK0ttSM

I feel him, when I was in Malaysia those monkeys are quick to snatch anything from your hands😂 pic.twitter.com/YGo53uIxxb

Those Batu cave monkeys donâ€™t play. Onetime I was there, one of them straight up stole a piece of bread from a baby monkey and slapped the baby monkey as he ran up out of there #BatuCaves 🐒 https://t.co/MOisN2zQpR

Despite the hilarity, there are some safety precautions you should take when interacting with a monkey:

In addition, we also think this tweet deserves an honourable mention:

Hopefully, this will be a lesson to anyone who thinks itâ€™s safe to approach these deceptively cute creatures.