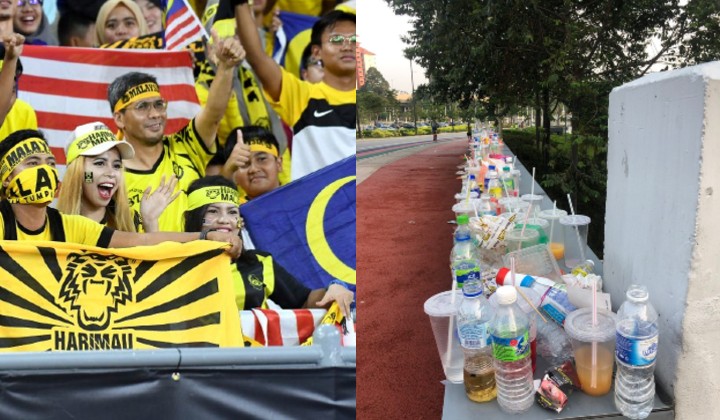 Just recently the National Stadium in Bukit Jalil was packed for the FA Cup finals match between Perak and Kedah, with the latter taking the trophy over a 1-0 victory to the thunderous roars of some 80,000 fans.

But sadly enough, looks like some football fanatics totally missed the goal when it comes to manners and public cleanliness.

In a posting made on Twitter, user Kar Jun shares images claimed to be the filthy aftermath of the football finals match which took place over the weekend.

Itâ€™s obvious that our Malaysian football fans donâ€™t care about the environment as much as they care about football. Thanks to their selfishness, our morning fresh air is covered with stinky smell, the running track is filled with rubbish. @SyedSaddiq pic.twitter.com/79ItYQPKoD

In it, he shares several images showing post-apocalyptic esque surroundings of the National Stadium which appeared to be littered by garbage.

In his tweet, Kar Jun questions the selfishness of some Malaysians and their disrespect towards the environment.

Kar Jun also directly tagged and mentioned Youth and Sports Minister Syed Saddiq onto his posting, stressing the importance of the scene.

Netizens quick to sniff out the viral posting were also critical of the issue confessing their disappointment over the major stink that some irresponsible citizens had continually brought upon the nation since such a scene would occur at almost every event and happening in the country.

“The ‘it’s the janitor’s job’ mentality. Why take care of things when there’s someone paid to do it… Environmental cleanliness is everyone’s duty…”

“That’s Malaysians for you. Busy condemning the government when their own minds are less than zero… Everyone wants to be treated like a king…”

“The government must enforce stricter laws. Impose a RM300 fine for littering. Simple as that. If someone disobeys, that’s their problem… Follow in Singapore’s example… A cleaner country makes for better tourism. Wake up Malaysia!”

(A previous version of this article wrongly stated Khairy Jamaluddin as the current Sports Minister. The error is regretted.)