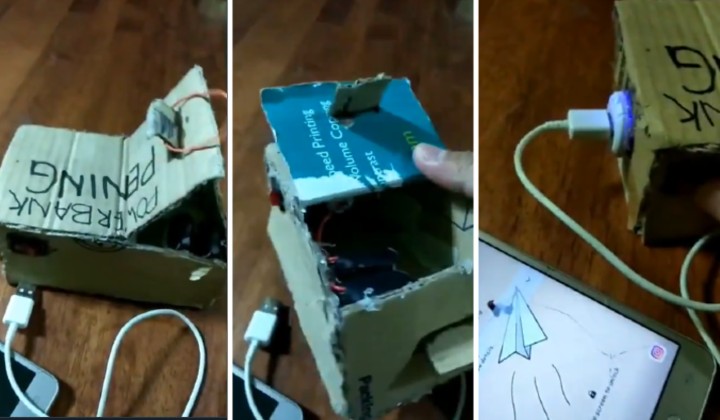 First an RFID lock, now a powerbank, we Malaysians are so innovative and tech-savvy!

When an abang complained to his little brother that he needed a powerbank but didnâ€™t get his pay yet, he returned home stunned.

Aku cakap kat adik aku “Abang nak beli powerbank tapi belum gaji”. Look what he made for me 😭 A handmade powerbank 😭 Im really grateful to have a little brother like him 😭 Nanti abang belanja MCD as promised 😭 pic.twitter.com/EDnIFjlUld

I said to my little brother, “I want to buy a powerbank but I haven’t gotten my pay yet.” Look what he made for me😭 A handmade powerbank 😭 I’m really gratedul to have a little brother like him 😭 Later I’ll buy you McD as promised 😭

@Goodensora also shared a short video clip to show how the powerbank works.

To those who were curious if it works. Here is my little brother’s creation yesterday 😄❤ My little brother said he will make more improvements on this powerbank 😬 Thank you guys for supporting my brother 😊❤ May your little siblings help you too 😊

@Goodensora explained that the ‘Pening Powerbank’ has a battery capacity of 450mAh .

To put it into context, an iPhone 6 has 1810mAh battery capacity, whereas the newer smartphones like Samsung S10 would have battery capacities of about 3400mAh.

Then, he shared a picture of his handsome young brother who ingeniously made the ‘Pening Powerbank’.

Naturally, there were some in Twitterjaya who gave suggestions on how he could make it better.

Can ask him to add a rechargeable battery next time. Then, can add charging port for the powerbank itself. After that, can put a solar panel (like those mini solar lanterns).

Twitterjaya is of course even more impressed that he is only 13-years-old.

Damn I thought budak uni ke apa sekali baru form 2. He has a bright future ahead in technology

I thought he was a uni student! But then he is only in form 2! He has a bright future ahead in technology

Well, we look forward to more innovations from this bright little one.

Perhaps one day his innovation might even get certification (you know, to make sure it’s safe and doesn’t explode).