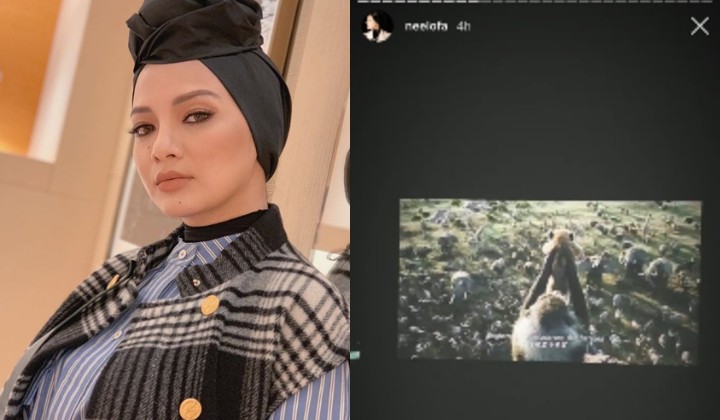 Popular television host and celebrity Noor Neelofa Mohd Noor is under a lot of heat from netizens for supposedly sharing clips from the latest Disney live-action remake, The Lion King.

Apparently, the celebrityâ€™s followers on the social media platform had noticed her posting up a video seemingly taken live from inside a movie theatre on her Instastory page.

So no one isnâ€™t gonna say anything about Neelofa recording The Lion King and posted it on her instastory? Or is it because she is a celebrity she can do whatever she wants? 😂 @TGVCinemas @GSCinemas pic.twitter.com/onaw2G9F7k

The posting managed to trigger multiple reactions from Malaysians who are generally dissatisfied by what she had done.

i really dont understand why people kena pegang phone and record all those stuff when your eyes sepatutnya focus on screen dekat depan tu? then, apa purpose tgk wayang kan? 🤔

â€œI dont really understand why people need to have their phones out and record things when your eyes should be focused on the screen. Whatâ€™s the point of watching the movie then?â€

“Hello Neelofa, didn’t you know that what you did was illegal?”

Isn’t this the second time she’s done this?

There were also those who came in defence of the celebrity, saying that such things weren’t really something out of the ordinary in Malaysia.

â€œIts basic Malaysian mentality to record on Instastories. Its not just Neelofa. If you want to take action make sure everyone gets the same treatment.â€

â€œI think it’s okay, Neelofa gave free publicity for The Lion King movie. Imagine 6.4 million of her followers seeing the less than 2-minute clip excited to bring the whole family along to watch the film. Who would benefit? Disney of course, with the money from ticket sales.â€

While some suggested that with the fashion icon and entrepreneur’s ‘star power’, she would probably get off the hook for her actions.

When you’re a star they let you do it pic.twitter.com/OEp2XeGGH3

Although it was still unclear where the celebrity was when she supposedly made the video, local cinemas prompted by the multiple tags and mentions from social media users also briefly joined in giving their tweet-ments in regards to the incident.

Do you have any information on which cinema location? We take allegations of piracy very seriously.

Hi, tq for highlighting. We have reported this to the movie distributor (Disney) for their further action.

Just recently another Malaysian Instagrammer had her account officially blocked for sharing clips from Toy Story 4.

Under the nation’s Copyright Act 1987, having a recording device in a screening room could result in a fine between RM10,000 and RM100,000, and/or a jail sentence of not more than 5 years!