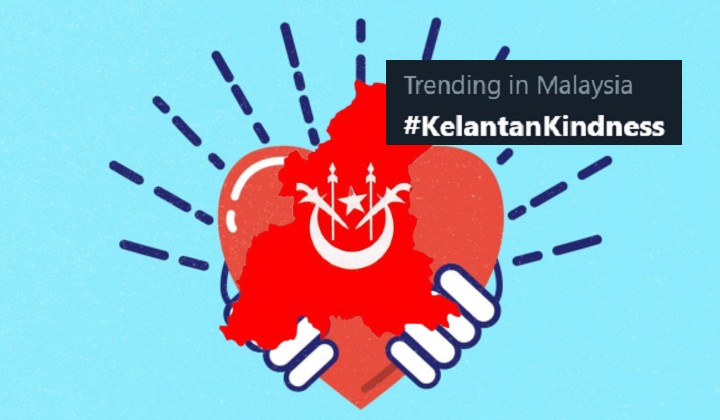 We all know Kelantan as that east-coast state, bordering Thailand that just loveeeeeeeees their budu (fermented seafood in a bottle), and have their own ‘language’ other Malaysians have difficulty understanding.

So one Twitter user @AdDien90 decided to spark some positivity on Twitterjaya towards the Kelantanese kind by creating the hashtag #KelantanKindness.

Well, it has been steadily trending all over Twitterjaya for about 24 hours now.

Always see people spreading hate towards Kelantanese, especially if there is any crime or viral issues. Itâ€™s not nice and not fair la like that. I believe a lot of Kelantanese are good people. Reply this tweet and share you experience with any Kelantanese #KelantanKindness.

The hashtag #KelantanKindness OFFICIALLY started trending as early as 6 hours after the first tweet.

Idk about others but sepanjang 21 hidup ni I’ve met with many good people from kelantan. I even grew up with some of them and i can see they are very kind. Stop this stupid racist thingy as if negeri kau tu takdek yg toxic suci baik je semuaaa #KelantanKindness

I have cousins who are kelantanese not only are they pretty as heck but they are sooooooo pemurah. My dad is a kelantanese. He usually nags at me bila I asked for money tapi bila bank in tiba2 kasi lebih eh- #KelantanKindness

Many are supporting his move too.

It is so popular that even the UNICEF representative Malaysia, Marianne Clark used the hashtag too!

#Kindness doesnâ€™t cost us anything but itâ€™s contagious and has the power to build happier, healthier societies. Being kind to each other sets the example for children and young people. Letâ€™s make #KelantanKindness #MalaysiaKindness https://t.co/eI5JMLxhOJ

FYI to put in context the misery faced by the Kelantanese clan, @AdDien90 shared a Direct Message (DM) he received.

In the DM, it was shared how s/he was once so depressed just being Kelantanese because of all the discrimination s/he had to face from colleagues and friends.

It was also disclosed s/he had to even leave social media because s/he couldn’t stand the discrimination.

S/he ended her DM with a thank you and prayed for @AdDien90‘s health and happiness.

#KelantanKindness kinda reminds me of this idiom.

Just bcs some people from the same state did that, satu negeri kena tempelak. No it is wrong. Hate the sins not the sinner.

Keep calm and educate yourself ok ✨

Truly positivity is something that you can easily catch, as intended by @AdDien90.