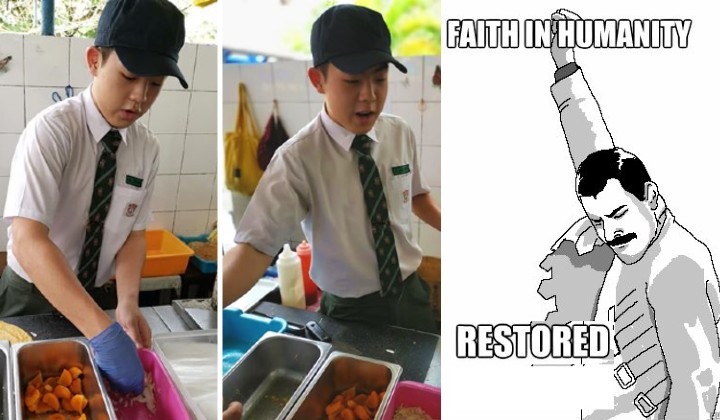 Do you remember how we used to rush to the canteen at the recess bell because well… EVERY MINUTE of the 20 we got was so precious!

Well, for this Form 4 boy, its a bit different.

Unlike other schoolboys, this 16-year-old diligently helps the makcik canteen sell food VOLUNTARILY!

BTW, he doesnâ€™t get paid!

Though the makcik does give him food laâ€¦

Later, if he wants to eat, he can just take whatever he feels like

Hau proves not only to be your average helper but is praised to be an excellent salesman too!

Cikgu Redzwan applauds Hauâ€™s calm composure as he entertains a sea of his peers rushing to buy makcik’s food with a sweet smile, and how he even wears gloves when he handles the food!

The makcik explains that Hau is the son of a hawker, and maybe that’s where he got his awesome skills from.

Now, how many of us would give up our break time to help out another human being?