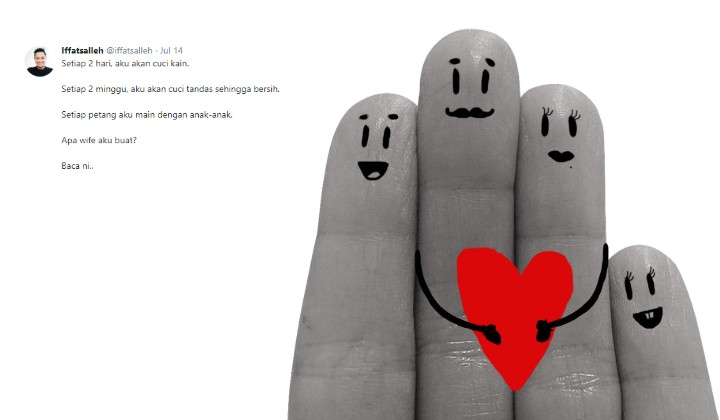 Twitterjaya is giving one Malaysian man props for being the ultimate model husband.

Taking to Twitter to share brief tales of his domestic life, Iffatsalleh provided Malaysians with a quick guide on how to maintain a happy, healthy marrige.

Iffatsalleh’s thread begins with a short list of his household tasks and responsibilities, from doing the laundry to looking after his two children.

“Every two days I do the laundry. Once every two weeks I clean the toilets. Every evening I play with my kids. What does my wife do? Read this…”

Apparently, Iffatsalleh does most of the household chores, leaving his wife to do whatever she pleasesâ€¦ (we have a winner right hereâ€¦)

According to Iffatsalleh, when he was a single, unmarried man, he was already accustomed to doing tasks and chores on his own and is opposed to primitive concepts like assigned gender roles.

“Before marriage, when I was still studying, I did all those chores on my own… Ironing clothes, doing the laundry, cleaning the bathroom. I did them all by myself. So, why would I have to hand over these tasks (to my wife) after marriage?”

“Even after getting married, I’m still doing those chores on my own. When my wife wants to do them, I’d say ‘if you want to help out, don’t complain of body aches later’. But every time she helps me, I’d have to give her a massage afterwards…”

Raising two boys of his own, Iffatsalleh explains that it was his duty to educate them on the responsibilities and frame of mind of a proper man.

“Even after having kids, I’m still doing all the work. If I’m too exhausted, then my wife would take over. Though, I always feel guilty when that happens.”

“Maybe (I feel guilty) because she has already given birth to our kids and takes care of them every day. Being a housewife is tough, it’s no joke. My wife has cried to me several times telling me how tired she was…”

He also said that his sons are already used to doing housework like taking out the trash and cleaning up because of their father’s â€œshow, donâ€™t tellâ€ attitude.

Back to the point, kenapa aku buat semua kerja rumah?

“Back to the point, why do I do all of the housework on my own? Because I have two sons. I have to show them that men should do housework too and it is not something that should be left only to the women…”

“And the two munchkins do help me out. They sweep, put laundry in the washing machine, hang the clothes out to dry, and even fold the clean laundry. I lead them by example. Show, don’t tell!”

Iffatsalleh’s aspirational Tweet had received some 20,000 likes and 30,000 retweets since it was posted on July 14.

Here’s what Malaysians are saying about it;

Men with good attitude become a good husband and father

“It’s hard to find a man that’ll help women with housework… I always meet the same lazy men who only know to critique other people.”

“That’s life after marriage. We call that commitment. Sincerely taking on responsibilities without complaint.”

Thank you on behalf of your wife.😁 My husb always cook with me or if xpenat dia akan masak on the day I have to work late. He has no problem basuh pinggan/doing laundry n he’s the one vacuuming the house sbb I selalu sapu jew mls pakai vacuum. We wives REALLY appreciate it.🙏🙏

“I’d like to thank you on behalf of your wife. My husband and I would always cook together, or he’d prepare the food on days I have to work late. He has no problems with doing the dishes, or the laundry, and he’s the one who vacuums our house because I always just sweep it. We wives really appreciate it.”

“Nice thread bro. I’m still single but I’ve always envisioned myself to become a man like this…”

“Finally someone said it. When I left to live on my own, I finally understood why my dad kept pushing me to do housework and chores. Dad always said, just because you’re a guy, it doesn’t mean you don’t have to wash, clean or do the laundry. If you can pump iron at the gym why can’t you pick up a laundry basket?”

I like how you treat wife cuz that is how it should be. I hope there many man out there like u! Hwaitinggg! I hope your marriage stay untill the end!

Good work Iffatsalleh on being a wonderful man, husband and father.

What do you think?

Did Iffatsalleh get it right? Or do you have other opinions about how a man and/or husband should rightly behave?