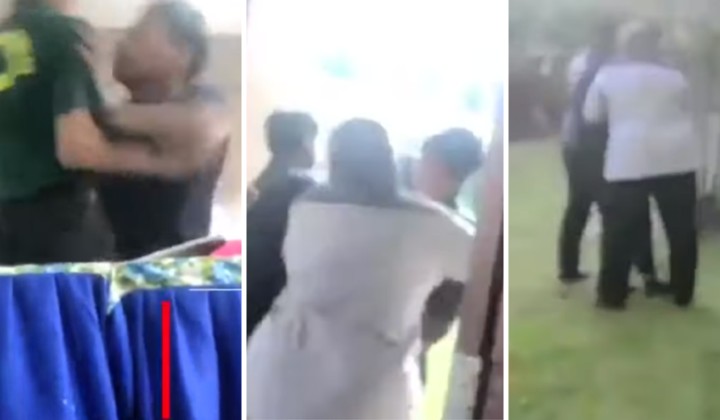 Trending on the internet now is a video of an English teacher who went full â€˜mama bear‘ when her Form 5 SPM students suddenly started fighting in class.

The 59-second video was recorded last Wednesday around 8am after the schoolâ€™s assembly in SMK Tunku Ampuan Durah, Seremban.

Ilhan Danish Zakaria, the student behind the whole commotion, told Harian Metro that Puan Norhafizah Abdul Malek initially thought the 2 boys were jokingly roughhousing with each other.

Though when the fight got more serious and the boys had started running out of the class, Puan Nor started to panic and immediately tried to break the fight.

Little did she know that her 32-student class had organised a surprise for her outside the classroom.

The prank was cleverly planned the day before by Ilhan. His 31 other classmates fully supported his plans and contributed money to buy the cake for their beloved English teacher.

Ilhan then explains how Puan Nor had always been a motherly figure to them, and this was a small way for them to show their appreciation to her.

Although it was still not her birthday yet, Ilhan and his classmates decided to celebrate her birthday earlier because they wanted to focus on their SPM exams later.

Well, the surprise turned out great alright, with Puan Nor shedding tears of happiness (and her students started following suit).

We Malaysians surely know how to appreciate our teachers, donâ€™t we?