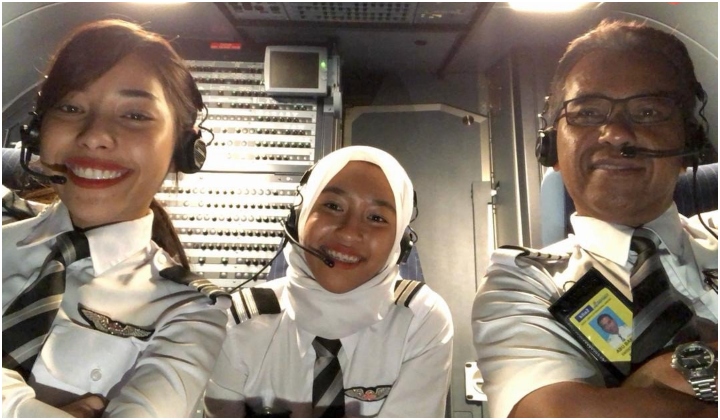 The story of a Malaysian father who reportedly quit his job at a company with which heâ€™s been flying with for 40 years has caught the attention of Twitterjaya.

He quit his job so that he’d have the opportunity to fly with his two pilot daughters before he retires.

This man left the company he’s been w for 40 years, started fresh as a junior, got a new rating at the age of 58, just so he could fly w 2 of his annoying daugters. I cannot tell you how grateful i am for this. Alhamdulillah, i finally got to fly w my abah! :’) pic.twitter.com/NQGGO4ucLO

Due to the company change, the father apparently has to start fresh as a junior pilot at AirAsia and work his way back up from the bottom.

One of his daughters, @SafiaAnisa, shared the story on Twitter elaborating on her dad’s story.

Aww thank you for the well wishes everyone!! ♥️ Just for clarification, my dad started flying right after spm, he was a cadet for MAS. After 40 years there, me and my sister both got a job at airasia. He then decided to come to airasia so he could fly w us before he retires! pic.twitter.com/bx6tOPqkMR

Twitterjaya was touched by the story, wishing the trio well.

Hehe he is! He was an instructor and an examiner in mas dulu. He’s rated on a lot of aircrafts, including 747 and a380. Hehe masuk company baru, kapal baru, environment baru at 58 bukan senang! Hehehe proud daughter here 🙋🏽‍♀️👊🏼

“Your dad must be really smart”

“He is! He was formerly an instructor and examiner at MAS (Malaysian Airlines). He’s rated on a lot of aircrafts, including 747 and A380. Now he’s entering a new company, flying a new plane, in a new environment at 58 years old. It’s not easy! Proud daughter here.”

“A whole family of pilots”

As her post went viral, it appears that many Twitterians know of her dad.

“I’ve flown with your dad once. He’s a very, very nice guy. Out of curiosity, if it’s your sector and when you want to request stuff, what do you say? “Abah (dad), flaps one please”? Hahaha!”

Your dad was my instructor on my first line training flight on the B734, back in 1993! Nighstop BKI! Kirim salam kat Capt.

“Your dad was my instructor on my first line training flight on the B734, back in 1993! Nighstop BKI! Send my regards to the Capt.”

Say hello to your dad. Letâ€™s see if he remembers me. pic.twitter.com/ueHfjlX6WJ

Good going, you three! We wish you all many pleasant flights ahead!