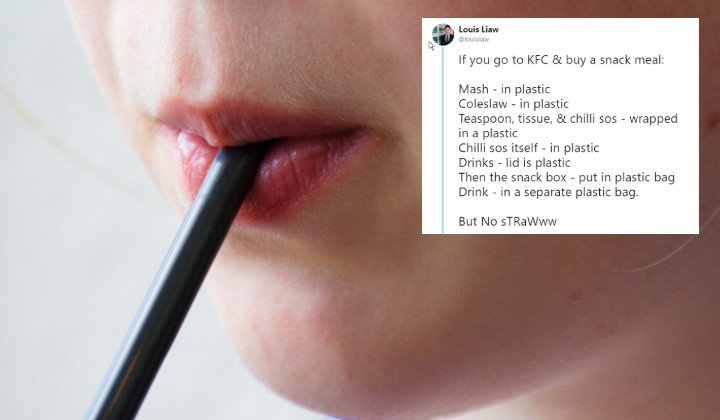 A sarcastic rant about Malaysiaâ€™s recent ban on the use of plastic straws is currently the grist for the gossip mill on social media.

Taking to Twitter to voice out his thoughts, user Loius Liaw tweets on the supposed hypocrisy of the nation’s move in addressing issues regarding pollution and single-use plastic products.

The tweet which was posted on July 11 pokes fun at Malaysia’s dream of a â€˜zero wasteâ€™ nation and the humour behind the prohibition on single-use plastic straws.

In his tweet, Louis joked on the irony of the straw-pocalypse when most consumer food items are readily available and packed in similar plastic-made containers.

Louis Liaw explains that although the move was a great step towards the end goal of saving the environment, there’s still a long way to go til this dream of ours can fully be realised.

Let it be clear that this is to poke fun at how much more has to be done if weâ€™re serious bout saving the environment. & @KFCmalaysia has to seriously think what theyâ€™re doing. However reducing single use plastic like straws is better than nth. Muting this, follow for more lols.

This sentiment was seemingly shared by a majority of Malaysianâ€™s who apparently agreed on the notion of this plastic paradox.

They just want to save the turtles. Not the earth 😂

Others, however, were more accepting of the idea, saying that the ban on plastic straws was a reasonable step towards minimising plastic pollutants and moving towards a cleaner Malaysia.

atleast people are trying to change 😌 slow and steady

While others see the straw prohibition as nothing more than a marketing scheme, pitting the blame on corporations and stating that it is the companies who are upmost responsible in addressing the global plastic problem.

I see it more as a corporate move. Being seen as eco-friendly is a strategic marketing these days. I mean…everyone cares abt turtles.

While these small â€˜no straw stepsâ€™ are good and all, real change isnâ€™t gonna happen unless corporations take the initiative to make bigger changes but we all know thatâ€™s not gonna happen bec of $$$. No straws are a bandaid solution to a bigger problem.

The ban on plastic straws has officially been in effect in Kuala Lumpur, Putrajaya, Selangor, and Labuan since early this year with the aim of educating the public on the long term impact of plastic pollution, particularly straws on the environment.

Although the straw-ban might seem like nothing more than just another half-baked means at addressing the global pollution crisis.

As the global community shifts its mindset toward being more aware and conscious about the planet, any method in trying to resolve our common problems can be seen as the right step at making a change for the better.

But, hippie speeches aside… Tell us your thoughts on the matter.

Is the plastic straw ban a good move towards a better, cleaner Earth?

Or is it nothing more than just a feeble-minded step at avoiding an even larger problem?