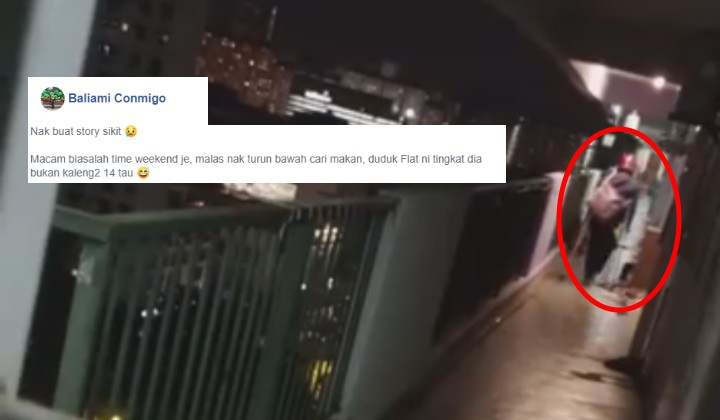 Viral footage of ones manâ€™s perseverance and struggle to make ends meet is making netizens mushy with emotion.

The video shows a glimpse of what appeared to be a disabled food-delivery rider, scooting his way across an outdoor corridor of an apartment building.

In the 8-second clip, the man in question can be seen slowly navigating his way with crutches in hand and saddling a bright pink bag on his shoulders.

The posting which was shared by Facebook user Baliami Conmigouser tells the story of how the particular viral scene was taken.

According to Baliami, the peculiar episode started with a simple hunger for a quick and easy meal.

“It was the weekend and as always I was too lazy to go out in search of food. I live in a 14 storey flat so you can imagine my sloth…”

“So instead I opted to order from either Foodpanda or GrabFood. I wasâ€™t feeling like getting rice, so just thought of ordering McDonalds insteadâ€¦”

However, upon the arrival of his long-anticipated meal, Baliami was struck with surprise by the fact that the one who came knocking at his door to deliver his food was an OKU.

Baliami even felt a bit guilty for having troubled the man for his dinner.

Apparently, the elevator to Baliami’s apartment had also been malfunctioning that day.

“When the Foodpanda guy came to my door I was shocked, he came all this way with his disability just to deliver my two pieces of chicken…â€

After having a quick conversation with the rider, Baliami proceded to provide the man with a small tip for his troubles.

“I went to get some cash, and at that moment I felt sad and sorry looking at the man, so I gave him a little extra (money). Not out of pride, but just as a small donation as a show of sympathy…”

Netizens from all segments of the internet can be seen sharing their empathy towards the diligence and sheer hustler spirit of the unknown delivery-rider.

“There are many out there strugling to make ends meet. One man’s inconvinience is another man’s treasure…”
“Hope he’ll be blessed with abundance… It’s sad seeing fully abled people theiving away…”
“God… so sad… just to get food on the table… I too would give some extra cash to the riders who would deliver my food as thanks for their efforts…”

Others also saluted Baliami for his small but thoughtful contribution to the hardworking man.

“Thanks for giving the guy a tip. Poor guy had to take the stairs. May god ease his journey through life. If it were me, I would’ve waited for him at the lift if I knew he had to climb the stairs…”

“Praise be to god… giving charirity and doing ones duty are both noble acts. Even with his disability, he’s strong enough to fend for himself…”

Some social media users also shared images and footage of whom they believed to be the fabled rider that they happened to come across out on the streets.

“I don’t get ordinary, healthy people who would resort to stealing.. Respect to this brother right here…”

The short heartwarming tale currently has more than 100,000 views on Facebook.

Have you by any chance happened to come across other hardworking OKU delivery riders out there?