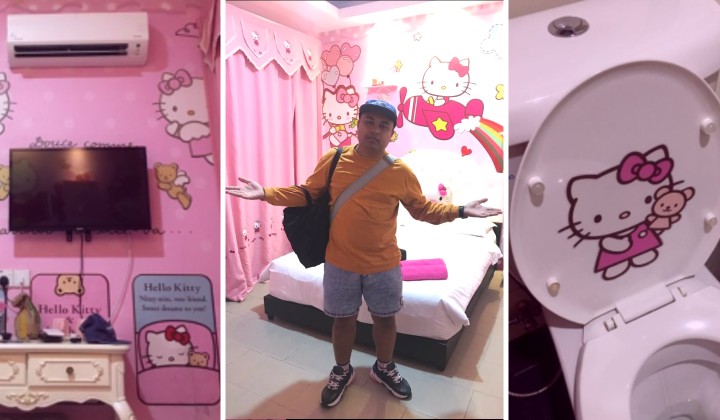 Zulhelmey Isnin, who is a photographer usually entrusts his lovely wife, Rabiatuladawiyah, the task of booking him hotel rooms whenever he goes outstation.

This time, his working trip down to Melaka from KL truly was Meow-nificient when his wife decided to shock him with a large, comfortable yet dripping pink room filled with Hello Kitties for him and his (male) colleague.

No wonder my wife was laughing when I asked her whether she has booked by hotel room or not. Turns out, she booked the Hello Kitty Hotel some more. I’m checking in with my guy colleague 😂😂😂😂😂😂

He was so ‘upset’ that he even shared what ‘torment’ he had to stare at in his room.

Although when we interviewed him, he was rather cheerful about the issue and only described the situation as ‘awkward‘.

Not angry also, just laughed non stop because it was so funny

Twitterjaya is, of course, having a field day with replies.

As the men could understand Zulhelmey’s feelings.

Not scary is it? Hahahahah. Like scary only when there’s so many cats

Whilst some others (females mostly) rejoiced and dreamt of having a similar room.

uan: Uish don’t want to go out of the room like this

Ira: hahahahaha good la. Save money on food, just sit in your room only. Eat all that wall paper

It’s so cute, I want a room like this

If you put Little Pony it would be even nicer

Well anyway, much to our surprise, he’s not the first guy to sleep in such a femininely glowing room.

haha yes us 3 guys (have stayed there too). We were desperate at that time. We saw this hotel and just checked in la. Once we entered, we got shocked 😂 but nice location near the tower