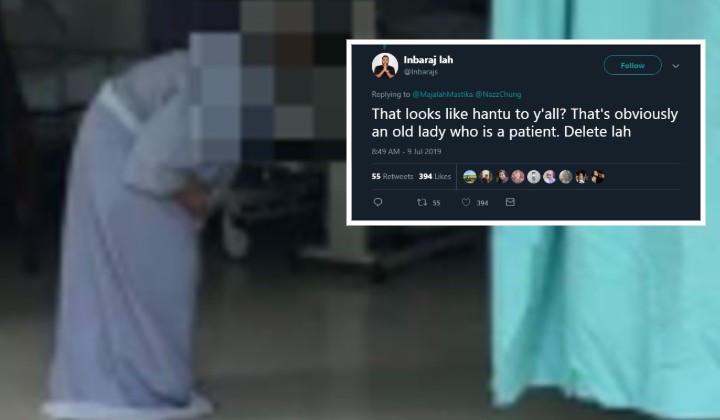 Translation: Nenek Kebayan is the Malay term for witches or old creepy grandmas.

A really (plain) picture of a grandma in her hospital gown has gone viral on the internet.

Albeit, the picture was taken at night with dark shadowy cubicles in the background (so maybe yeah la a bit scary).

Originally, the picture was shared on Facebook and caused quite a stir among Netizens.

Later, the Negeri Sembilan Health Department had come forward to explain the situation and asked to remove this picture.

Dear admin, please delete the picture, below is the explanation and clarification from Jabatan Kesihatan Negeri Sembilan. FYI/A pic.twitter.com/TJ2GaWeZcr

We would like to refer to the picture of the senior citizen that was seen walking alone in the said picture.

We are informed that the senior citizen happens to be a patient in one of our hospitals.

In relation to that, to protect the privacy of the patient and her family members, and also to avoid false pretenses by netizens, we request the removal of this picture.

Twitterjaya is now also upset, demanding the photo to be removed as well.

That looks like hantu to y’all? That’s obviously an old lady who is a patient. Delete lah

Whose grandma is this you guys are laughing at? Please la regret your actions. You all also have parents that will grow old one day.

That grandma isn’t even wearing a hijab, after that you nicely upload and make it viral without her consent. If you want to make a story, no need la make fun of her. How many thousand RT did you guys get? Are you willing to bear the sins when people look at her hair? LOL

They have also apologised for their action, saying that we should together love old folks, especially since we all will become old one day.

What does the law say about this?

According to the Malaysian Medical Council (MMC) Guideline, prior consent is needed for photographs.

There may be medico-legal reasons for taking photographs, or audio-visual recordings, as in cosmetic surgery or ablative surgery involving upper or lower limbs.

Such photographs and audio-visual recordings rightfully belong to the patient and if to be retained by the practitioner, further consent must be obtained.

Sorry nenek, but we pray for nenek’s speedy recovery OK.