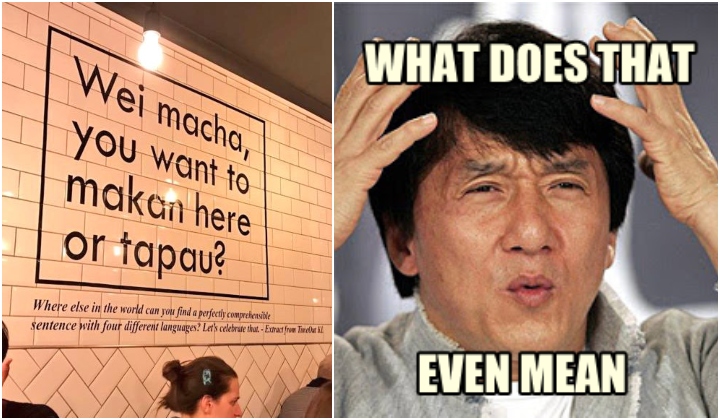 In Malaysia, the English language is taught all the way from primary school right up until university. In fact, Malaysia is the top third country with the highest English proficiency in Southeast Asia.

Many Malaysians, especially those living in urban areas, can speak English really well. In fact, more often than not, we are bilingual (if not trilingual or quadrilingual considering many of us are also proficient in either Mandarin, Cantonese, or Tamil, too.)

So, it’s absolutely normal to hear us switch between any of these languages during conversations and when writing online.

On the wall in my local Malaysian cafe @rotiking2 :

Itâ€™s lovely when cultures get along. pic.twitter.com/91umqDRaU0

However, it appears that our practice of bahasa rojak has left quite a number of foreigners completely confused when reading our tweets and comments online.

“Yo, I feel attacked. Please delete. But why do you care Roman? HAHAHAHA I did not expect you to mention my country. Anyway, thanks for coming to my TedTalk.”

“I know right? I have a tough time deciphering what they are saying as well. One minute they’re speaking in with the Northern dialects then they switch to the Kelantanese dialect. That’s not counting the Sarawak language. It makes…(?????????)”

Code mixing and code switching are sexy! Monolinguals can never

“Code mixing and code switching are sexy! Monolinguals can never. It is so satisfying to mix languages while speaking. Want to scold someone? Use your mother tongue. Want to converse? Use mixed language. Hotel? Trivago.”

How we type is kinda how we speak really.

“That’s the standard, Roman. It’s not Malaysian Twitter without it. How we type is kinda how we speak really.”

Twitterjaya also pointed out that we relate to this confusion when reading tweets by Indonesians and Filipinos too.

But still nothing can top filipino twitter, they have the most interesting opening tweet in english then suddenly the rest of the story changed into tagalog like a cliffhanger

Honey that is what Malaysians feel when we met Filipino’s twitter. They started a thread with an English title yet the whole content is mixed with Tagalog 😂😂

Meanwhile, Twitter users from Indonesia replied by flexing their ability to speak in multiple languages (Although, we have to admit that we have no idea what they’re saying)

we have several languages up on our belt jadi kita cuma ketik whatever language comes up pas lagi ngetwit, biar kepala ga sakit cuma gara2 one language fights with the others in our head

And then Twitter users from other countries chimed in with their own experiences with people mixing languages.

India is worse. They switch from Hindi, to English, to Bengali, and then to Punjabi before the sentence even finishes.

Is it just us or does it seem like most countries with an official language other than English are more likely able to mix their mother tongue with the widely spoken language?