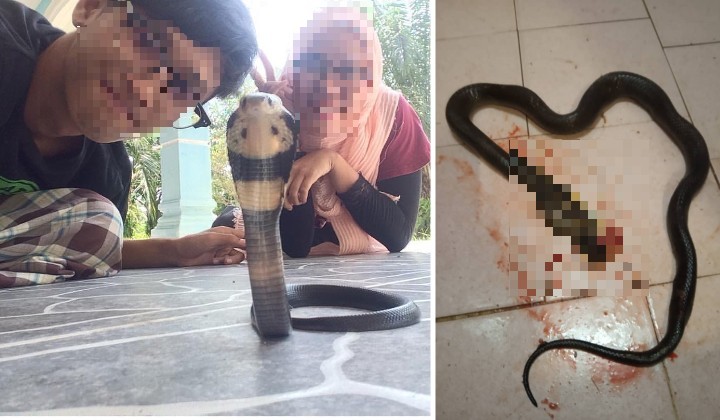 Snakes seem to be crossing paths with Malaysians a lot recently what with snake charmers in uniform to snakes appearing in grocery shops and even a lady putting make-up on a small python.

Well this time, a Twitter user @ybmisai97 absolutely smashed a snake which she claims tried to bite her kittens.

“Next time don’t appear when I am moody, cos you’ll get it.”

Twitterjaya, of course, had their own hilarious comebacks to this peculiar situation.

However, @ybmisai97 had a response locked and loaded.

At the same time, there are also many who are saying she was wrong in killing the snake.

My ustazah said, genies can take the form of snakes inside the house. And there are ways to chase them, if they don’t get out after more than 3 tries. Then we can kill them, but if they leave the house after we ask them 3 times, then they really are genies. That’s what my ustazah said.

According to the famous website Islam: Question & Answer, there are hadiths in Islam that detail the rules on killing snakes in the house.

“The Messenger of Allah (blessings and peace of Allah be upon him) said: â€œThese houses have inhabitants. If you see any of them, ask them to leave for three days. If it goes (all well and good), otherwise kill it, for it is a kaafir.”

Meanwhile, some other people had some advice for the young lady’s boyfriend…

“To this girl’s boyfriend, I want to give some advice. When your girlfriend is moody, don’t go looking for trouble.”

There were also some who say that cobras normally live in pairs, so killing one, would cause the partner to seek vengeance.

To this, @ybmisai97 showed that she’s unfazed by snakes.

“Maybe it was looking for its partner here.”

It turns out that the young lady is herself a collector of exotic animals (licensed) which is why she has no fear of such creatures and often crosses paths with wild reptiles because she lives in a rural area.

BTW this is not the first time snakes have entered my house, because I live in a rural area. 😅😅

I’m not a hater of snakes 😅😅 because I keep licensed exotic animals. It’s just that day I had to kill it because it wanted to bite my nieces/nephews, so I wouldn’t sit still and watch them get bitten right? 😅😅

By the way, as tough as this young lady appears to be, she’s still afraid of one kind of creature.