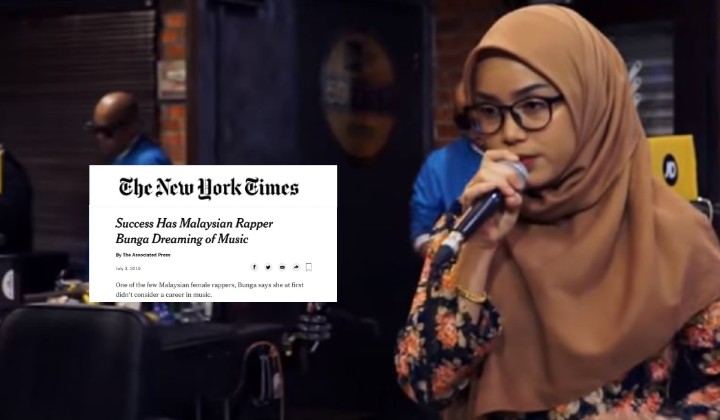 Another Malaysian making us proud is Bunga, or fully known as Noor Ayu Fatini Mohd Bakhari.

A 19-year-old who caught the attention of New York Times Journalist in Singapore last weekend at â€œPesta Rayaâ€ the Malay Arts Festival.

She captivated the audience with her style and rapping skills.

Bunga, who was only recently discovered late last year in November gained popularity when she adorned the baju kurung (on top of being a hijabi) at U Try Rap Please competition in Glenmarie.

That was the competition that started the baju kurung trademark.

Her reason was simple, she just wanted to stand out above the crowd (despite being the only female competitor).

She was then groomed by Hear Me Out before she was signed under Warner Music Malaysia.

Bunga has also been featured in the famous â€˜16 Barisâ€™ in Subang Jayaâ€™s famous barber shop by Joe Flizzow.

She often writes her own rap lyrics which are based on her own personal life experiences in love, with bullies, and that time she worked at a gadget shop.

Despite being in the baju kurung, it doesn’t seem to slow her down from moving to the grooves.

Although rapping wasnâ€™t her initial plan in life, she seems to be doing very well in the field.

Being only 19, she has the potential to go far in the league, like other famous Malaysian female rappers, Hunny Madu and Nadhirah.

We are happy that she is recognised and hope to see more of her in the future.