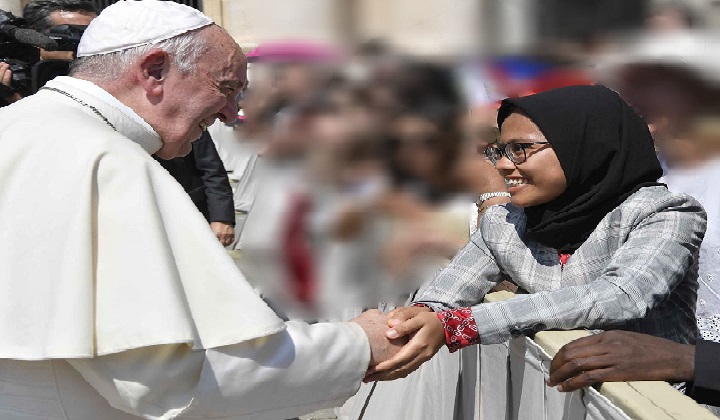 In a world where tolerance, respect and common sense seem to be disappearing, something magical happened on social media this week.

A picture of an Indonesian Muslim woman shaking hands with Pope Francis, head of the Catholic Church, has gone viral.

The image caught attention after Instagram user Fadjroel Rachman (@fadjroelrachman) shared it on his account on Sunday, captioned with a quote from Dewi Praswida, the woman in the image.

â€œMy hijab and your robe are not barriers for us to be brothers and sisters.â€

The powerful image depicts the young woman firmly clasping hands with the pope as he smiles at her. To date, it has almost 12,000 likes.

According to The Jakarta Post, Dewi was visiting the Vatican to take part in an interfaith dialog fellowship. She soon got the opportunity to shake hands with Pope Francis in St. Peterâ€™s Square on June 26 and extended her hand while introducing herself as a Muslim from Indonesia.

She also told Kompas.com that she was the only person at that time to shake hands with the Pope and introduce herself.

â€œI was the only one who shook hands with him at that moment. I introduced myself to the Pope and asked him to pray for me and world peace.â€

Dewi also shared the image on her Facebook account, playfully asking for the Popeâ€™s skincare routine as she found his hands super soft.

Many people on the internet shared in her joy for the significant moment, calling for unity:

Translation: Dewi Praswida has shown the true face of Indonesian Muslims to the world. Proud of you

Translation: Praise to God! What a beautiful kinship

Translation: It’s true that all of His creations are created for good with love and kinship to raise the world together.

Translation: It is possible for mankind to appreciate each other and can live together in peace and harmony.