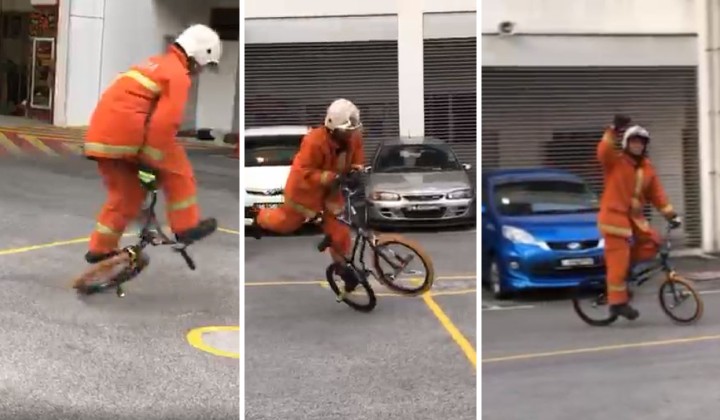 What started as a private video on WhatsApp between colleagues mucking around at work, suddenly turned viral.

Nur Hazme Janis, a firefighter at the Sentul Fire Station, pulled off some cool moves on his BMX bike, and netizens are impressed.

In his full Bomba costume, he successfully performed a flatland with his BMX bike.

When Harian Metro interviewed him, the Johorean claims that he has been in love with the BMX bikes for a long time now.

Hazme isnâ€™t just your ordinary BMX enthusiast mind you, he once represented Malaysia in Phuket for the Asian Beach Games 5 years ago, where he reached the finals.

His moves come from his hard work practicing about 3-4 hours daily after work at the Bukit Kiara Rakan Muda Complex.

On top of that, he goes to YouTube for inspiration.

He must have been a legend in the 90’s

Surely he is a legendary fireman alright!