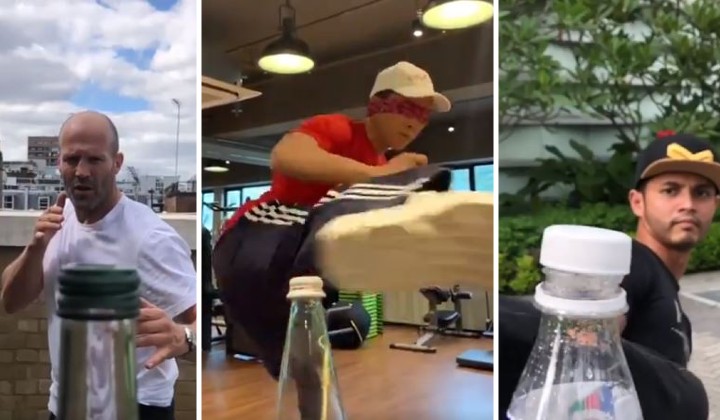 Social media is on a spin once again!

It went viral when buff Transporter hero Jason Statham posted it on his Twitter account with a 23-second clip of his swift move uncapping a bottle.

“#bottlecapchallenge #challengeaccepted This thing landed on my head from @johnmayer but will quickly go to a couple of fellas weâ€™ve seen do push ups badly. All yours Guy Ritchie and @jmoontasri” | https://t.co/J1X9XWKxHl pic.twitter.com/RT16VahcMv

Hong Kong Martial Arts Artist, Donnie Yen took it a step up by doing the challenge blindfolded and purely with a sweep’s kick.

Malaysians too have started picking up this challenge claiming it as #cabaranpenutupbotol.

Local celebrities like the famous health enthusiast Hairul Azreen (husband to beautiful model Hanis Zalikha) has over 755,000 views and over 150,000 likes in just 1 day with his swing at a 100 plus bottle.

Of course, Malaysians have tried to be funny with their own versions too.

Instagram user namiesmy started off with a silat kind of move which turned out to be him just flicking the bottle cap with his thumb. Well, he has 335,000 views in a mere 19 hours.

This martial arts phenomenon has even been caught in classrooms.

Girls don’t worry! There are women who are also participating this smooth martial arts challenge.

So what are you waiting for? Get those kicks practicing and unleash your inner martial artist!