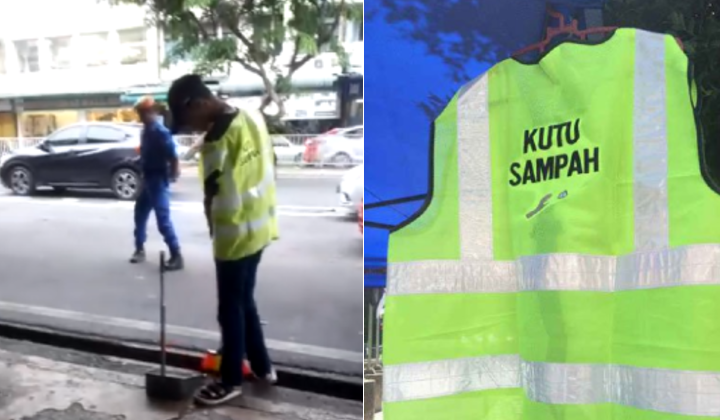 A peculiar video of a man forced to sweep the streets of Sabah is making rounds on the internet.

The viral clip shows footage of a man with a broom and dustpan in hand, styling a bright green fluorescent vest with the words â€˜Kutu Sampahâ€™ written on it in black bold lettering.

Apparently, the man had been caught littering by the Sandakan Municipal Council.

The state of Sabah observes a very strict ruling when it comes to littering.

Those caught in the act would have to pay a hefty fine of RM250 to the districtâ€™s Health Department, and another RM100 to the municipal council.

And for those who fail to come up with the cash will be punished by doing a lil service to the community.

Which was apparently what happened to the unlucky man in question.

Sources note that the guy was immediately asked to fork out RM100 for his indiscriminate untidiness, but after failing to do so, the alternative was clear…

For one whole hour, the litterbug was made to sweep the very streets that he had so effortlessly disrespected.

(Neat right, a just punishment if I do say so myself…)

In the clip, one of the officials can be heard speaking to onlookers, advising them on the laws and regulations attributed to cleanliness in the state.

“Please, help us spread the word.”

The state of Sabah has been at an all-out war against litterbugs.

Previously several individuals were sentenced to complete one hour of community service, in which they were put on gotong-royong cleanup duty in the state.

To add insult to injury, the were also required to wear a vest with the word ‘Monyet’ (monkey) written on it, for the duration of their punishment.