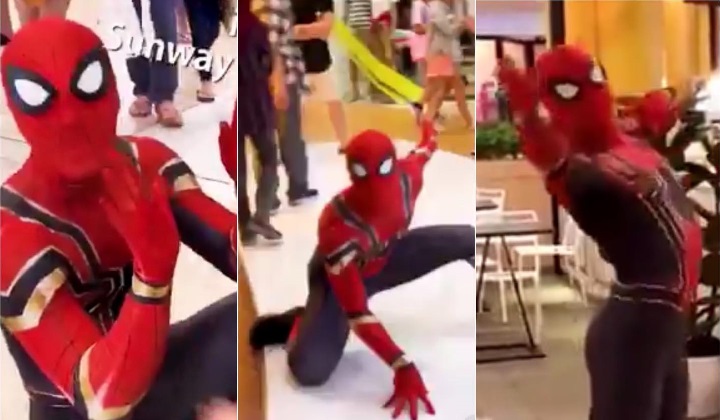 Locals in Sunway Pyramid were in for a wild ride when Spider-Man popped by for a visit! Thatâ€™s right, the famous red arachnid himself left the Big Apple for the Big Lion instead. We donâ€™t know about you, but our Spidey Senses are tingling watching this alone!

So i wore a Spiderman Suit around Sunway Pyramind and pic.twitter.com/L5inYERR66

The true identity of the cosplayer is none other than the Malaysian online personality, Eric Lau LÃ¶fstedt, best known for this viral video of Snapchatâ€™s gender swap. The video went viral worldwide, and stands at 6.4 million views as we speak!

Omg😍😍😍
Rt and tag a friend that NEEDS to see this😍💦😍 pic.twitter.com/T9x5OM9OcL

His latest video shows a hilarious tale of Lau as Spider-Man, running about entertaining random Malaysians who were out and about in the shopping centre.

From doing impressive backflips, Naruto-running, Fornite-dancing and showing off some parkour moves, we also see how Spider-Man can get down to Blackpink! Now thatâ€™s something Tom Holland canâ€™t flex about!

It ends on an adorable note of Spider-Man meeting little kids who were more than excited to get a high five from their heroes! A child happily high fived him with both handsâ€¦ but it proved to be too much for Spider-Man as he collapsed dramatically to the floor.

The poor girl evidently started panicking about it but luckily he was revived and even gave her a hug (after accidentally knocking her down as well).