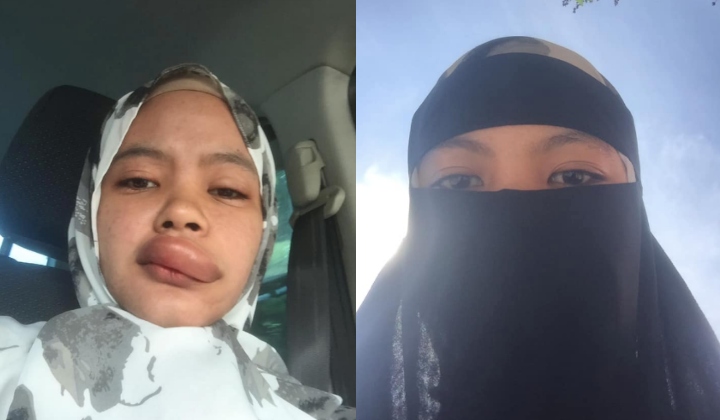 A Malaysian woman found this out the hard way when she got stung by an unknown insect recently. Even though it appears that she probably had a mild to severe reaction to the sting, fortunately sheâ€™s well and safe now.

She shared her story on Facebook and people couldnâ€™t help but giggle at her humorous rendition of the events that transpired.

â€œI donâ€™t mind if you guys laugh at me. Even I chuckled while looking at my reflection in the bathroom mirror.

Two days ago, I had an incident with an insect. But, I have no idea what insect it was.

I was enjoying my ride to work when I suddenly felt something land on the left side of my lip.

The photo is mirrored, that’s why it looks like the right side of my face was affected.

Read the story based on my caption for each photo okay.
The conclusion is, next time I ride a motorcycle, I should wear a full visored helmet. Or maybe even a purdah.â€

On June 26, Kak Idaa was riding her motorcycle on the way to the salon where she works. While she was enjoying her morning commute, she suddenly felt something land on her lip.

Upon arrival at the salon, the left side of her lip was slightly swollen. She didnâ€™t think much of it at first and proceeded to get to work and go about her day as usual.

She presumably put her things down and started preparing to work. Several moments later, she went to the front of the salon to sweep and mop the floor when she realised that the swelling on her lip had gotten slightly worse.

She also noticed that she started feeling itchy in her armpits. She assumed the itch was due to the fact that she was sweating as she worked. However, she then noticed that her arms were starting to become itchy too.

She continues working and notices that the swelling on her lip was getting worse while the itchiness was starting to become quite unbearable. At that point she started to consider going to see the doctor.

Later that same day she finally goes to the clinic. At this point, it appears that her face has now broken out in hives.

Her lip is HUMONGOUS.

After seeing the doctor, she relays that she was sitting in the waiting room for her medication. She was feeling embarrassed at the state of her face. She was also uncomfortable because she was feeling a little nauseous from the jab the doctor just gave her and she was also still SO.VERY.ITCHY.

A random man at the clinic saw her and started telling her a story about the time when he got stung by a bee.

â€œI was already feeling so dizzy, and the man insisted on repeating his story to me three times. I felt like sellotaping his mouth shut. But I guess it was fine, at least there was some entertainment during this very stressful moment.â€

On the way home, her eyelids started to join her lips in the swelling competition.

She says she was feeling very stressed in this photo because her brother was teasing her about her lip, saying she was gonna look like that for the rest of her life.

The following day, Kak Idaa decided to don a purdah during her trip to the pharmacy as there were no masks at home. We get ya, girl. We wouldnâ€™t want to leave the house “bare-faced” either!

Later that same day, most of the swelling had gone down. Kak Idaa still had a little puffiness on the left side of her face. But, by now it was barely noticeable.

By the following day, Kak Idaa was all better!

Fortunately for Kak Idaa, her reaction to the sting was not life threatening.

FYI, if you guys ever get stung by an insect, here’s what you can do to treat it.

To take care of an insect bite or sting that causes a mild reaction:

Usually, the signs and symptoms of a bite or sting disappear in a day or two. If you’re concerned â€” even if your reaction is minor â€” call your doctor.

When to seek emergency care

Call 999 if the injured person experiences:

You can take a look at Kak Idaa’s full post below: