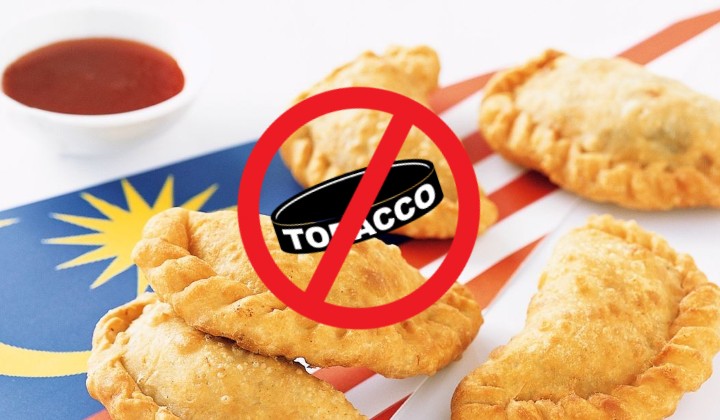 Two Malaysian men were caught at the Tuas Checkpoint on the
Singapore border last weekend for trying to smuggle in 7,500 sachets of chewing
tobacco into the country.

Their mule of choiceâ€¦

Yup, thatâ€™s right, these two master-smugglers were stopped in a van while trying to cross the border during a routine check by the Singapore Immigration & Checkpoints Authority (ICA).

In a posting shared through the ICA official Facebook page, authorities noted that the 32-year-old driver and his 30-year-old sidekick were traveling with the packaged consignment which was officially declared as being nothing but tasty, edible curry puffs.

But surprise, surprise… upon checking, ICA officers found the truth to be nothing more than just some karipap inti angin…

What they found was a buttock-load of chewing tobacco that was not-so neatly stacked underneath the already cooked pile of snacks.

And talk about a quite the haul… rows and rows of the contraband can be seen lining up the floor in an image that accompanied the posting.

In the posting, the ICA also quickly warns of other would-be attempts to outsmart the countryâ€™s border patrol.

â€œICA will continue to conduct security checks on passengers and vehicles to prevent smuggling attempts of undesirable persons, drugs, weapons, explosives or other contrabands.”

“The same methods of concealment used by smugglers may be used by terrorists to smuggle arms and explosives to carry out attacks in Singapore.â€

But in hindsight, maybe the duo were simply on their way to kick off a habit instead…

In a piece of surprisingly related news, Singaporean mosques are now encouraging smokers to quit their dirty habit by getting them to trade in their cigarettes for, youâ€™ve guessed itâ€¦ more karipap!

The ‘Puff For A Puff’ initiative is an anti-smoking campaign aimed to educate the public on the cost of smoking on one’s health as well as oneâ€™s pockets.

In neighboring Singapore, the price for standard 20-pack cigarettes is about $14, or about 70 cents a stick. (Thatâ€™s around RM42 per pack and around RM2 per stickâ€¦)

So instead of simply burning away one’s paycheck on these killer death sticks, the program intends to help smokers rehabilitate by opting for a tasty, healthy treat instead.

The campaign which began late last June is said to run till mid-October and is joined by 22 different mosques on the island.

If you are a smoker and happen to be in the country during this time, why not make a quick stop to puff away your addictions.