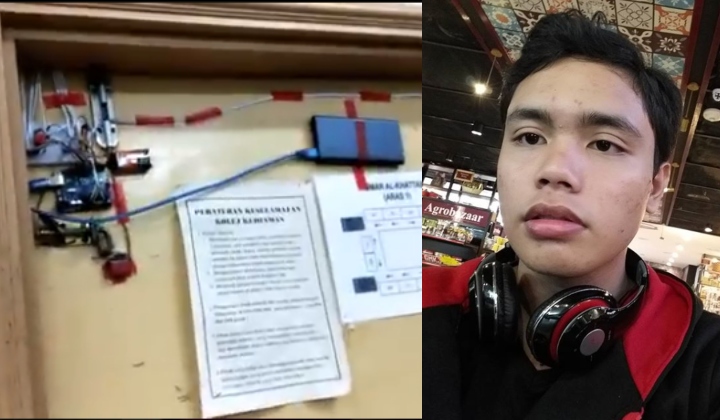 Danial just started his foundation studies at Kolej Matriculasi Kejuruteraan Pahang (KMKPh) in Jengka, Pahang. Yet, heâ€™s already viral on Twitter for being so smart and capable.

Danial had a problem: he was afraid of someone breaking into his room at college. Heâ€™s seen people pick the locks on the doors in his hostel using merely a piece of steel wire.

So, he beefed up his security system by successfully installing an automatic lock system onto his hostel door.

Everytime someone approaches his door, the system auto-locks itself. To unlock it, Daniel and his roommates simply wave their IC at the card reader.

Replying to tweets online, Daniel further explains how it works.

We donâ€™t entirely understand whatâ€™s going on, but we figure the reason he programmed the door to auto-lock only when someone approaches, is to conserve battery. The whole system is hooked up to a power bank as a power source.

FYI, this isnâ€™t an original invention by Daniel. He learned how to do it through a YouTube tutorial video and it took him one whole day to install the system.

Only I and my three roommates have access to the room because I keyed in the registration numbers for our ICâ€™s using a programming system.

Donâ€™t worry, you aren’t the only one here feeling absolutely insecure over this young manâ€™s intelligence.

“His brain! Despite only just continuing his studies, he’s already a genius”

“This is just a hobby project for him and it’s already so good. I wonder how his final year project will turn out”

“Wow! Even though he’s only in matriculation, he can already cook up something like this! Solid! Good job bro!”

He was so viral that even the Education Minister, Maszlee Malik, tweeted about him!

Since the tweet was widely shared, many netizens have asked Daniel if he could post his own tutorial on the project.

Many people have asked me to teach them how to recreate the system. Insya-Allah, I’ll make a video tutorial to help other people out.

If it’s any consolation, Daniel isn’t a robotics noob. The eldest of three has had an interest in engineering and robotics since he was 8 years old.

The competition, held at the Tamagawa Academy & University, Japan, saw Daniel and his team of three other students win second place.

So, confirm this kid is definitely gonna do well in life, lah…