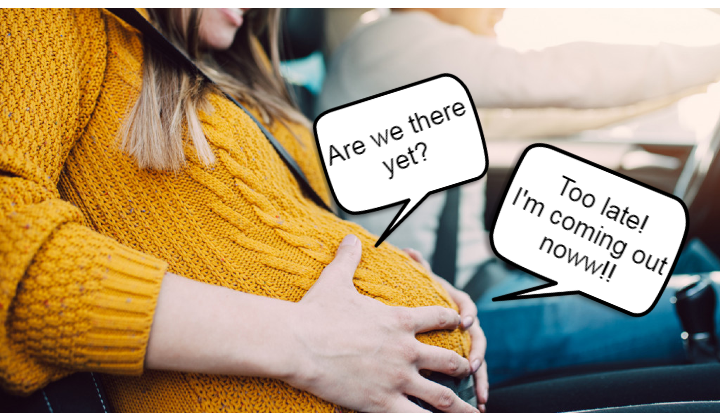 Seems like the miracle of life can literally hit you anytime, anywhereâ€¦

Through a short posting on Twitter, user @cieri shares her experience delivering her baby girl in a car while her husband was speeding away on route to the hospital.

You know what happened today?

While husband was driving/speeding to get me to the hospital.

Based on the comment section of the Tweet, cieri had arrived at the hospital with a healthy and active newborn, together with the umbilical cord and placenta still attached. (Which was later taken care of by the doctors…)

Speaking from her newfound experience, cieri said that in such a tense situation, there was nothing more that could be done but to remain calm and collected.

Not really tips but, it really helps when you dont panic and keep calm.

Whether it was fate or destiny, it would seem as though this “love for the open road” sorta-kinda runs in the family…

With close to 3,000 likes and retweets (During the time of writing…), cieri’s unique experience is quickly becoming the talk of Twitterjaya with netizens showering the mother with warm congratulatory wishes.

Translation: You’ll be telling this story to your grandchildren for sure.

Congratulations on yr baby’s epic entrance to the world 🙌🙌🙌

he is born to drive

Translation: Believe me, they won’t sell the car even if when the kid is all grown up.

Some commenters also took the time to guess what would be written down on the child’s birth certificate.

2. On the way to the hospital

3. Delivery location (actual location where the baby came out)

Whatever it is, it’s going to be a long one…

Teacher: Where were you born?

On the way to the hospital, teacher.

And apparently (Much to the writer’s surprise, really…) these ‘born before arrival’ cases are quite the common occurrence, as commenters also shared their personal and second-hand experience about giving birth on the road.

Translation: My husband was also born inside a car. My mother-in-law said that he couldn’t wait to come out.

Translation: Same as my brother.

My cousin almost gave birth in a Grab Car. She was screaming and in pain on the way to the hospital. The baby came out while she was standing in the hospital lobby. Luckily she was wearing a pair of Gobos pants, so the baby didn’t fell on the floor.

A mother’s love really knows no bounds… Congratulations to the couple on welcoming their baby girl!