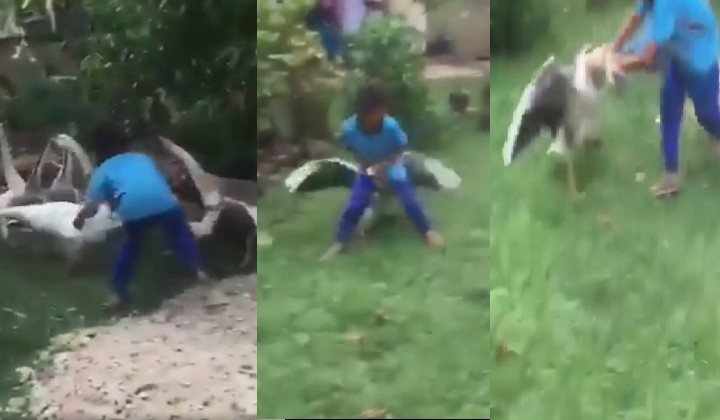 What do these names have in common?

A video was shared on Hati Kampung Facebook group has caught the attention of the internet with the savage moves of a young boy with a goose.

He begins by running fearlessly into a gaggle of geese before dragging one out by the neck.

Then, he MOUNTS THE GOOSE AND RIDES IT.

Meanwhile, the poor bird was seen flapping helplessly throughout the chokeslam.

While the kid â€œplayedâ€ with the goose, the person recording the incident can be heard laughing manically.

Scrolling through the comments on Facebook and Twitter, there were many who were amused by his actions.

Give this kid a medal already. 😂😂

Translation: “This kid is so brave… must’ve watched a lot of WWE”

Translation:
Comment 1: “Last time for me, there wasn’t enough space to run ahahaa”
Comment 2: “This kid must be really brave if the geese are running away like that“
Comment 3: “Kids nowadays are so fearless, chasing dogs, stone cold goose stunner #respect hahaha”
Comment 4: “Hahahaha.. usually the goose will win and the kid will cry. But this is the opposite… you’re great, kid….”

However, there were also voices of concern for the blatant display of animal cruelty.

Thank god im not the only one whoâ€™s seeing this.

Translation: “Cruelty to animals, so young and already torturing animals. Take stern action against the kid and parents too.”

Translation: “Animal cruelty. Behaviour like this is the reason cats died during Raya”

This incident comes mere weeks after the internet was ablaze with stories of kids torturing pets during Raya open houses, which resulted in death of many furkids.

Looks like we still havenâ€™t learnt our lesson, huh?

You can watch the entire smackdown below: