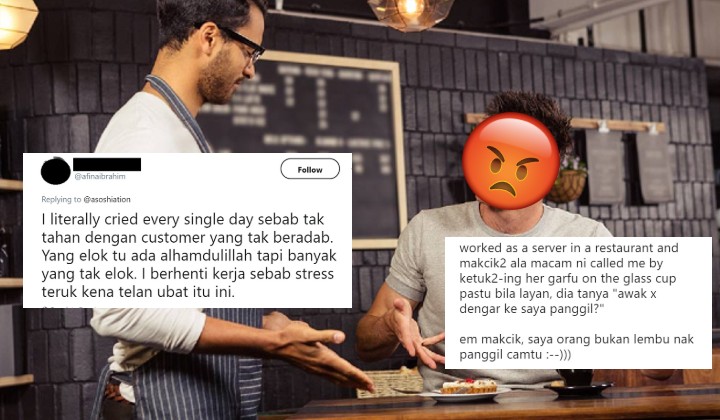 Have you noticed there seems to be a lot of news of rude
customers lately?

From that angry mak cikâ€™s Chicken Rice Shop rant to the vandal teens in Family Mart, it looks like being in F&B is ROUGH.

Thatâ€™s exactly what Twitter user @asoshiation set out to establish with a series of tweets sharing her experience working in F&B.

worked as a server in a restaurant and makcik2 ala macam ni called me by ketuk2-ing her garfu on the glass cup pastu bila layan, dia tanya “awak x dengar ke saya panggil?”

Translation: “worked as a server in a restaurant and this mak cik called me over by knocking her fork on the glass cup. And when I came to serve her, she said â€œdidnâ€™t you hear me calling you?â€
Em, mak cik, Iâ€™m a human not a cow to be called like that”

Followed by an interaction with Mr Moneybags:

Translation: “one time, a customerâ€™s card got declined so I apologised and all. Suddenly, he started yelling in my face while showing me his ATM receipt saying, â€œeh hello. You think I donâ€™t have money?? You look at how many thousands of ringgit I have in this card!!â€
Okay, but the problem is that the card is still declined Datoâ€™ oii”

And then thereâ€™s this gem right here:

#5 ada dato tu order something aku tak dengar so aku minta repeat, pastu dato siap gelak2 cakap kat anak2 dia, “see this is what happens when you don’t study well, you work here and you can’t even understand simple English. Kan, dik?” so I told him –

Translation: “There was a Datoâ€™ ordered something I couldnâ€™t hear. So I asked him to repeat. Then the Datoâ€™ laughed and told his daughter, â€œsee this is what happens when you don’t study well, you work here and you can’t even understand simple English. Right, dik?” so I told him–“

“Sir, I teach English at Cambridge to students similar to your daughters’ age. I just didn’t hear you well enough, it has nothing to do with my education.” dato pun tersipu malu terus order oren jus

There was also a mathematician who wanted to pay half the price because he only ate half the meal:

Translation: “There was a customer ordered take away saying “I will take after the movie”. We were all ok la, can cook the food in an hour. Turns out, the movie ended at 12.45 am… us staff were waiting for him like fools because we didn’t want mice to come hahahaha”

Her tweets gathered quite a lot of attention with over 7,000 retweets and fellow F&B workers sharing their own PTSD-inducing experiences.

Like this customer who ordered a beef burger AND THEN SCOLDED THE WORKER for not knowing he can’t eat beef (um…. WHAT?)

Translation: “there was a customer who wanted hot water, I gave her hot water from Coway. She started scolding me saying “Dik, this is warm water. I wan’t hot water.” The water was steaming. Then I put it in the microwave and gave her. She went and said, “This is too hot, dik. I want hot water”

I didnâ€™t get much asshole customers since my particular workplace was a cafe&bar, and the food is expensive, but there was this dude whO was having dinner with the fam, and while dining be proceeded to cut his nails AT THE TABLE

Drive thru store at a supermarket , customer demanded me to remove a trolley that’s not even blocking the lane… Threaten to sue me if car was damaged. Sigh 🤦🏻‍♂️

When The Rakyat Post reached out to @asoshiation, she told us that she saw the mak cik ranting at the Chicken Rice Shop server and felt bad for the girl.

“Some situations are beyond our control. Obviously sometimes we have problems like shortage of staff, so we have to work twice as hard to meet the demands. But at times like these, there’s always customers who just barge in and treat the servers really badly.”

“I think people really need to know that servers, bartenders, people who work in retail and customer services in general, they’re humans too and they have feelings. Sure, we make mistakes sometimes but that doesn’t mean we can be considerate towards each other. You’d be surprised that the person handling your food could be a PhD holder!

@asoshiation’s observations serve as a lesson for Malaysians to reflect on how we treat people who are perceived to be “lower”.

Remember the wise words of Malcolm S. Forbes, “You can easily judge the character of a man by how he treats those who can do nothing for him.”

Customer Behaves Rudely At Pizza Worker, Says He Is A PhD Doctor