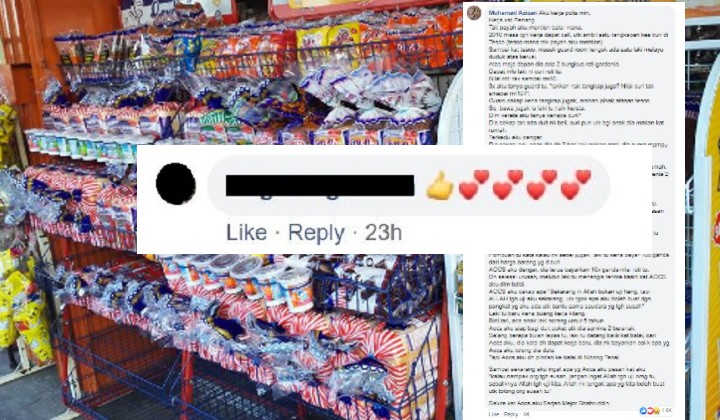 Little did he know, his comment would spread like wildfire, with over 4.6k likes and copy-pasted into numerous internet sites.

The gist of the post is a story of how a policeman empathised with a man who stole 2 loaves of bread from a hypermarket.

The hypermarket insisted on his arrest, refusing to consider the thief’s reason or the fact that the amount lost was negligible.

On the way to the police station, the thief explained to Azizan, the policeman, that he only stole the bread because he had lost his job and it has been days since his 5 year old son and him have eaten.

Azizan’s superior showed mercy was in a police station in Penang, to the extent that his superior even gave some money to the thief.

And because it is a comment by a policeman about his superior, the story really caught the attention of netizens.

Especially when the police force is one that isn’t glamorously known for their kindness or good nature in this country.

Generally, the wave of emotion that flooded both men and women of Malaysia was spectacular.

We had the pleasure of having a little chat with him about the comment that has gotten the internet shook and tearing, and he explained what really happened.

This just reminded him of a similar kindness his superior potrayed not too long ago.