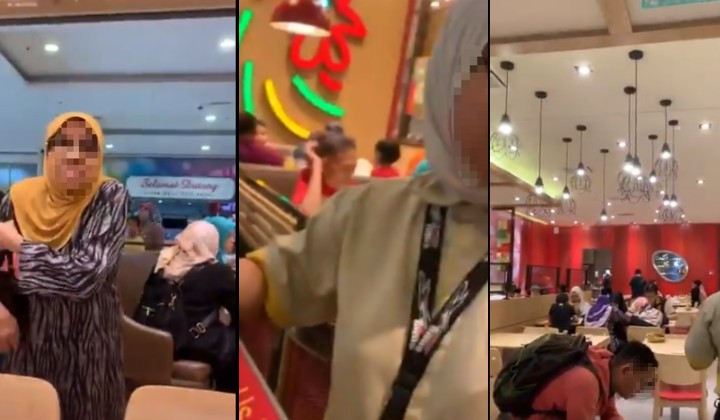 Have you ever heard the saying, â€œa person who is rude to the waiter, is not a very nice person to begin with.”?

Well that was surely the verdict netizens gave one woman who apparently ruffled her feathers at a popular chicken rice franchise in Putrajaya recently.

In a posting made on Twitter, user @zzabidin attempted to expose a local The Chicken Rice Shop outlet for having â€˜the worst serviceâ€™ that she has ever received. (talk about exaggerating rightâ€¦)

The tweet which included a 1-minute video which she recorded herself, shows the moment that transpired as zzabidin frustratingly walked out of the restaurant after she received less than egg-cellent service.

In the video the woman can be heard flapping out at one of the restaurantâ€™s staff and pecking the attendant on the poor service that she and her mother (who can be seen in the video) had been getting while they were there.

â€œIs this how your service (your) customer? There is no excuse if you are short on staff. When people sit you (must) come and take their order.”

@zzabidin can be heard saying in the video

Though the restaurant did not look too busy from the footage, several other patrons can be seen inside the the store, with a flock of other customers seen queuing up awaiting to be seated.

zzabidin’s complaint however did not go so well with Twitterjaya as a majority of commenters are saying that her actions during the making of the video were impolite and disrespectful.

Translation: “Such a rude customer.”

The worse chicken rice shop?! I think youâ€™re the worse person with no civic!

Some users were also calling out the woman on her impatience and cocky sense of entitlement.

You donâ€™t belong here Mak Cik, I thought Ramadhan has taught you to be more patient.

Translation: “Making the issue viral doesn’t make you look good either. Makes you look dumb, shows how impatient and intolerable you are. Just go to the chicken rice stall by the roadside next time.”

Though whatever the truth may be, zzabidin might look forward the the fact that The Chicken Rice Shop franchise had recently been bought over by Japanese restaurant operator Zensho Holdings Co Ltd.

Maybe soon she’ll get that proper service that she craves.