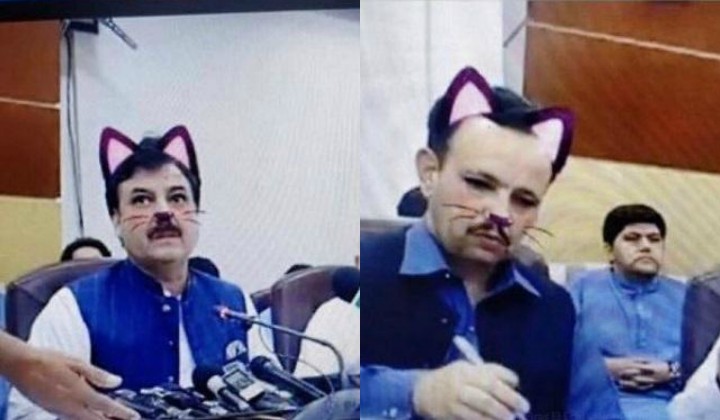 Using a filter for videos generally helps with looking good and keeping our followers entertained while watching our videos.

Most of the time, the use of a filter is intentional. But what happens when itâ€™s unintentional? And used during a serious live stream, such as for a politician’s press conference for example? Well, the video goes viral.

Recently, Provincial Information Minister Yousuf Shaukat Zai, from Khyber Pakhtunkhwa province in north-west Pakistan and member of the ruling party PTI (Pakistan Tehreek-e-Insaf) had his social media team live stream a press conference he was speaking at through Facebook Live.

The press conference was about the recent decisions made by the provincial Assembly. However, netizens had a hard time focusing on the topic at hand.

Unbeknownst to Yousuf Shaukat and his social media team, the videographer had accidentally activated a filter during the live recording. And it wasnâ€™t just any filter, it was a cat ears and whiskers filter…

As the camera changed focus between Yousuf Shaukat and his colleague, the filter moved around too and eventually stuck to his colleagues face, who then had a similar cat-like appearance.

The live-stream video immediately went viral on social media, which erupted with cat-memes and cat-ch phrases. Unfortunately, the video was later taken down from the political party’s official page.

What have this official PTI KPK Facebok page has done with KPK Information Minister Shaukat Yousafzai 😂 !
This is INSANE. @SAYousafzaiPTI pic.twitter.com/bttJt5FrdB

Positive image of Pakistan is being promoted though a press conference streamed live on Facebook with cat filter on ministers of KP province.. pic.twitter.com/ihjxarISfe

According to KP governmentâ€™s social media team we now have a cat in the cabinet #Filter pic.twitter.com/LNl7zwOfLU

After the adorably embarrassing incident, the partyâ€™s social media team posted a response addressing the mishap

Pakistan tehreek e insaf social media team is deemed to be the pioneers of social media in Pakistan. We not only price power cells in bringing Pakistani politics to internet but also feel content in setting high standards of SOPs#PTISMT
1/4 pic.twitter.com/oMPTu88LZ1

The whole thing got us thinking about what our own politicians might look like if they adopted this practice.

At least it would ensure their videos reached the masses, kan?