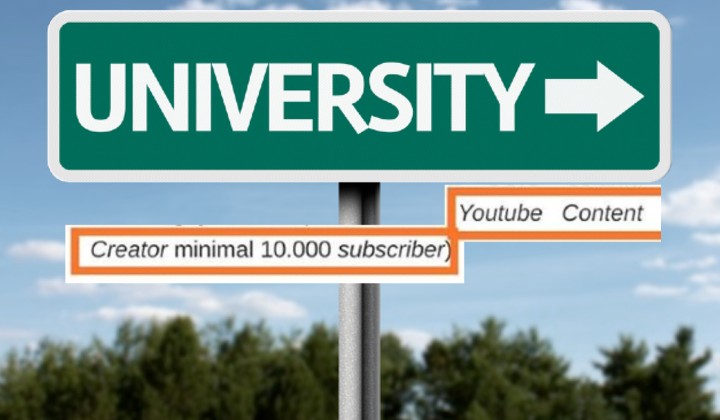 Entering a university can sometimes be quite daunting with some requiring straight Aâ€™s while others may charge high entrance fees.

But a university in Indonesia is offering a place to anyone with a YouTube channel that has over 10,000 subscribers, or has a video with over 10,000 views.

What kind of university is this?

The first yhing that might pop into your mind would be a hipster, cool kind of university.

Influencers where you at?

But, on the contrary…

National Development University Veteran Jakarta (UPNVJ) is a reputable university in the capital city of Jakarta that offers a wide range of courses, from veterinary science, to agriculture, and economics.

However, UPNVJ explains that actually having 10,000 subscribers or having a video with views doesnâ€™t automatically secure you a place in the university.

Instead, the applicants’ YouTube channel would be screened by a committee after which, applicants need to make a video of about 2-3 minutes whilst on campus.

The university explains that their main goal of having a YouTube â€˜influencerâ€™ is to convey positive messages and influence society for the better.

Besides, after all that, you would still need to take a a computer-based written test (UTBK).

So no guys, being an influencer and getting into uni isn’t as easy as it sounds.

Though at least this university provides the opportunity for influencers to have an academic future.

Though… how many of us have 10,000 YouTube followers anyway?