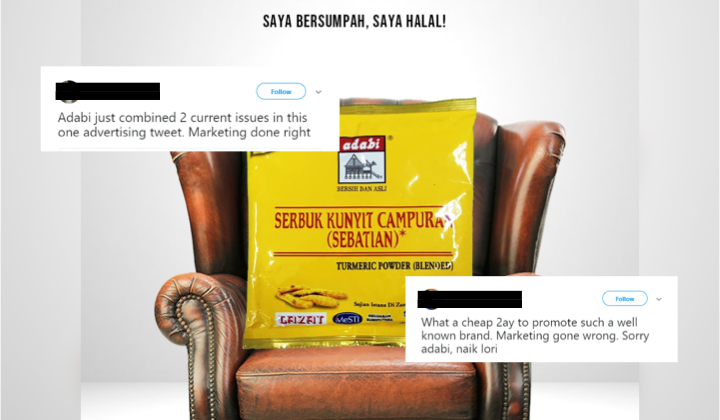 For the past couple of days, the local internet sphere has been abuzz with halal certification and controversial politics.

In the midst of this commotion, a certain local spice company decided that they would not let the opportunity for some viral advertising go to waste by posting this:

The tweeted poster and caption is very kias-kias, so we arent entirely sure what theyâ€™re getting at.

However, if we were to take a wild guess, we’d say the “saya bersumpah, saya halal” part is throwing shade on the whole tapioca pearls in bubble tea halal issue.

Meanwhile, the poster depicting a packet of kunyit (turmeric) sitting on an armchair refers to a recent confession video posted online of a man sitting in an armchair.

“Mengunyit” is a Malaysian slang word used to describe sexual relations between people of the same sex.

The tweet, which was posted aroun 2.30pm today, has since garnered 5.1K retweets – and the internet is divided.

On the one hand, many think that the tweet is insensitive and a cheap shot at the LGBT community and the people involved in the controversial political incident.

Adabi taking a swipe at the #azmingate

They are really treading on thin ice
Azmin is still the Minister https://t.co/znnH8stafx

On the other hand, many netizens are commending the company for being able to relate their products with current issues and taking the pun light-heartedly.

This ads sarcasm is powerful af 😂😂😂 Adabi loves make something trending as meme or sarcasm https://t.co/bpK6JW3sUU

Do you guys think such things shouldn’t be joked about? Or are some people on the internet too serious sometimes? Let us know in the comments!