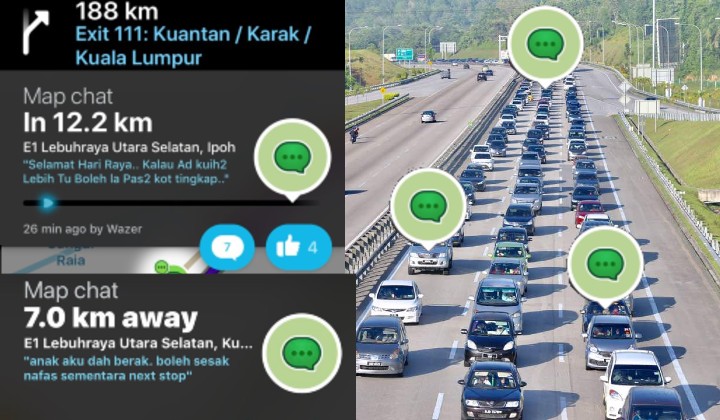 Yesterday, the North South highway had a field trip for itâ€™s Waze users as they got caught in the traffic jam coming back to Kuala Lumpur.

Twitter user @zahidbaharom shared a thread of hilarious comments he screenshoted of other fellow road users who were also stuck on the road with him.

He started his thread with a harmless compilations of screenshots very innocently with a user describing the traffic jam as sticky as dodol.

Then it got a little wilder when someone started cursing, â€œThose slow pokes on the right lane are pigs.â€

Though generally the tweets he compiled were hilarious.

With one from a Waze user called maks_pain, “My kid pooped. I can’t breathe till the next stop!â€

Another unknown Wazer took a step further, “I want to poop. Where was yesterdayâ€™s Tupperware?â€

Any guesses on what he plans to do with that Tupperware?

And the unknown wazer continues, “Please help me! I feel like pooping and my stomach hurts, I didn’t eat right.â€

On the flip side, there were more joyful Waze users who wanted to feast on the road.

An unknown Wazer invited the others by saying, “Letâ€™s celebrate Raya on the highway. Anyone sharing Raya cookies. Hungryâ€

One even offered some nasi dagang, an East Coast delicacy.

Another fellow Wazer also invited people to their car, “Do come Raya at my car, this traffic jam is going to be a long one.â€

Some more money-minded said, â€œCome letâ€™s Salam Raya in the jam, at least my kids can get some Duit Raya…â€

You can also read multiple regrets and sighs on the Waze Map Chat.

Some regretting marrying people from up north.

“Why? Why did I match with a northerner? The girl next door wanted me. I didn’t want. Now I feel it.”

â€œI should have just married my next door neighbour.â€

On the contrary, some were looking for spouses.

“In the midst of this jam, is my soul mate here? My mom is making noise.”

Another pointed out that those who didn’t want to sit in the jam could have opted for the viral Helicopter Raya rental service.

Lastly, some wanted to try the old (ill-advised) Kiki Challenge.

Whatever it is, it’s really good that some Malaysians are able to find the humor in any situation and can cheer up each other, to boot!