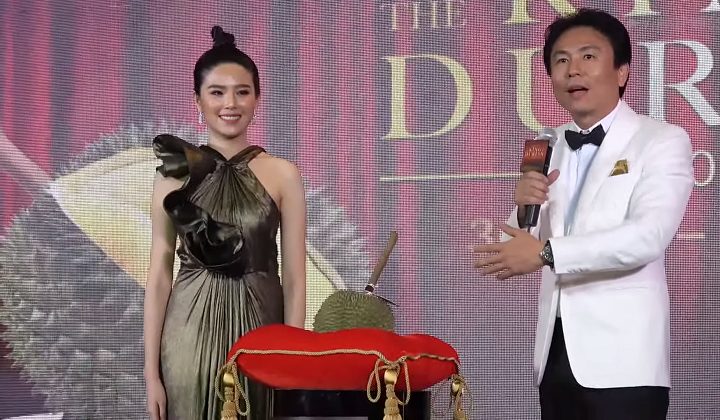 Itâ€™s durian season, folks! While that may mean indulging in our national problematic (letâ€™s be honest: the smell has made quite the headlines for itself) favourite fruit, it seems like some people can take â€˜durian crazeâ€™ to a whole different level!

So what was so irresistible about this one, single, spiney, smelly fruit?

According to Next Shark, there was more to this durian than it seems. Being from the Kanyao variety, which is native to Nonthaburi, this particular species of durian was thought to be extinct in Thailand until farmers began recultivating it.

As the Kanyao durians are extremely rare (with only 3 to 4 fruits per tree!), they are often booked in advance. Thatâ€™s what you get for the â€˜tastiest durian in the worldâ€™, huh!

The durian craze in Malaysia seemed to have hit as well, though perhaps not as hard. In Penang, a woman complained about spending nearly RM1,000 on only 3 durians!

The numbers donâ€™t seem to add up right? Clearly, the buyer thought so too and as a modern person of the 21st century, took her complaints to netizens.

After her post went viral, even local police had to step in regarding the caseâ€” much to the sellerâ€™s displeasure.

According to The Star, the shop owner, Chin Ah Chian, 52, said the customer willingly came to the store on her own and inquired about the biggest and tastiest durians.

He explained how the Black Thorn durian was RM95 per kg (but he generously charged it for RM90 per kg instead!) and Musang King was RM60 on that day.

He also mentioned how his staff had informed her of the prices, so the customer was well aware of what she was going to be charged for. There was no fuss or complains when it was time to pay for the fruits either.

The customer however, felt otherwise. She claimed that she was not informed of the weight of the fruits until it was time to pay up and the bill was a whopping RM937!

Chin mentioned how he gave the customer a week to talk it out over with him (since sheâ€™s currently overseas) and if not, they will have to take it to officials. â€œHer post has given my shop extra attention,â€ he said, â€œbut the comments are very hurtful.â€

Both parties seem to be filing for a police report, but itâ€™s hard to say whoâ€™s in the right or wrong. Chin is being very transparent with the case, and will oblige to anything the police needs assistance with. The woman too, feels the same, as she is insistent that she has not done anything wrong.

Seems pretty crazy that durian fever led to all of this, huh? What are your wildest durian moments that youâ€™ve experienced before? Let us know in the comments!