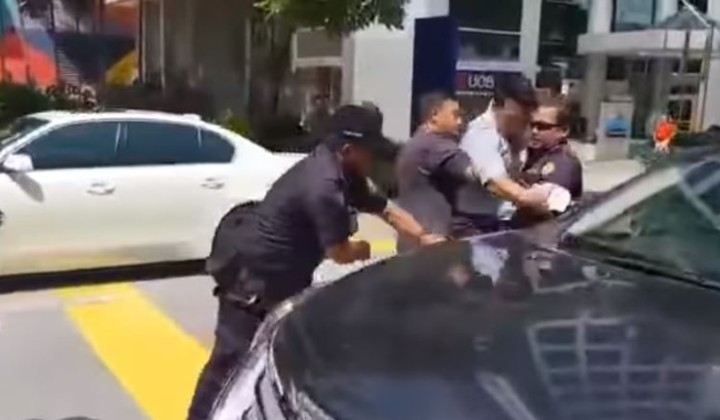 A 3 minute video surfaced on YouTube yesterday featuring a lady holding a flower, a â€˜lawyerâ€™ and MBPJ enforcement officers trying to tow the car.

Though we’re not sure of what actually happened, it can be seen that an offence was made by a Nissan car which led to the enforcement officers wanting to tow the car.

However, a man in light blue shirt (presumably the owner of the car) tried to block his car from being towed away.

A lady in the video can be heard saying, “Heâ€™s a lawyer,” as the presumed owner argues with the enforcement officers.

Also seen is a man wearing spectacles who tried to calm everything down.

At one point, the owner looks at the camera and claims the enforcement officers had promised to let his car go if he paid the fine immediately.

â€œWe come in 5 minutes to get flower, and they lock the car already,â€ said the lady in the background.

Yes, you can see the lady holding a flower in the beginning of the video.

Letâ€™s be reminded that by law, it is an offence to stop government or local authorities officers from carrying out their duties, and we should always park in the correct places (even if it’s for 5 minutes).