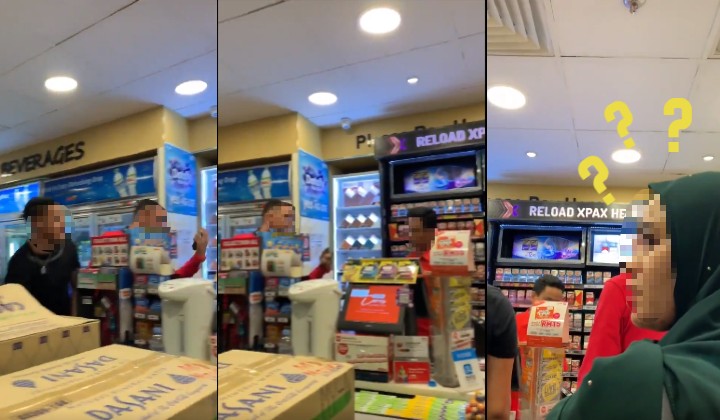 Ramadan is considered to be the holiest month in the Muslim calendar.

Not only is it the time where millions of devout believers patiently starve themselves from the crack of dawn till sunset….

…Itâ€™s also considered a time where one would make an effort to better themselves through patience, self-reflection, recollection, and prayer.

Though for some, keeping calm on an empty stomach can be.. challenging… as shown on a viral video gaining views on Twitter.

The video posted by user Aiman Ariff depicts what appeared to be a quarrel between two men and a convenience store cashier in Kuala Lumpur.

In it, the two men – one in a black and the other in red – are seen to be shouting in a crowded myNews.com convenience store and asking if the cashier wants to fight them.

So this happened yesterday while was queueing up in line at MyNews Sogo.

Can we stop having embarrassing Meleis throwing public tantrum like this? pic.twitter.com/fd0l8ueqgx

Aiman, in a thread following the video, recounts that the issue began with a mistake by the cashier but was blown out of proportion by the customers.

Okay, so apparently the cashier made some mistake on charging them. Yes, it was the cashierâ€™s fault for that.

But, benda boleh bawak berbincang kot. Everything can be talked out like adults and be discussed like one. Without all these unnecessary scene and dramas

Another Twitter user claiming to be a fellow employee of the store added on that the incident occurred due to an error over a phone top-up.

Twitterjaya came together to rant on how a simple misunderstanding, which could have been solved calmly and collectively, was turned into an episode of Cerekarama.

Some were also quick to question why no one (especially the one
who recorded the video) had stepped in to break up argument.

But Aiman made a valid point in responding towards the so-called “criticism”.

So for those who said that why I didnâ€™t do anything to stop this?

If you were in my situation. Imagine these two men are at the peak of their rage. They were shouting potential physical threats. And and a tall mascular guy tried to stop him but, was pushed aside.

The minute-ish long video currently has over 200,000 views.