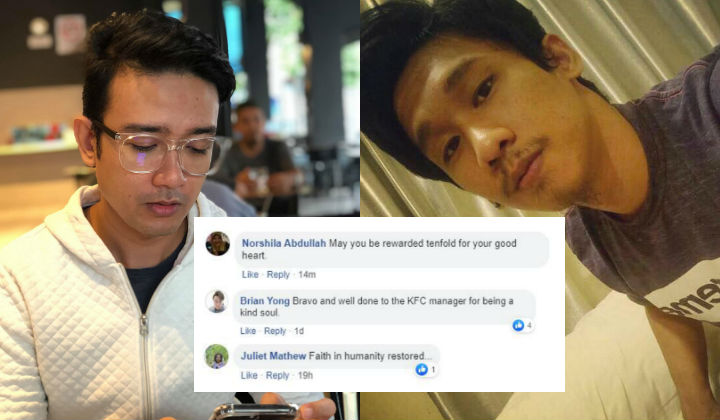 Nazrin Ramli, manager of KFC Bandar Sunway, accidentally found himself in the spotlight recently, with many netizens praising his generous actions.

We reached out to him and he told us that he was just doing something nice for someone in need.

“My parents always teach us to help others no matter who they are, rich or poor alike.” Nazrin says.

He did not know the customer, filmmaker Gary Chong, before the incident in which he paid for Gary’s food because Gary had no cash on hand.

“His bahasa is very fluent! And he [was] wearing this nice baju melayu.”

“He politely asked to get a picture of me to write a story about that day.” Nazrin says of Gary.

But Nazrin also said that Khamirul Ami, the cashier who served Gary Chong that night, deserves recognition as well.

In telling the story, Gary had written that the polite cashier was very apologetic that the credit card terminal was offline.

Nazrin says he wasn’t expecting anything out of this act of generosity.

He and his colleagues have helped to pay meals for others on many occasions before this.

“I never thought that this will go viral till The Rakyat Post covered it,” he says.

“[I] hope this will act as a catalyst for other people to help others and be nice no matter who they are and wherever they are.”