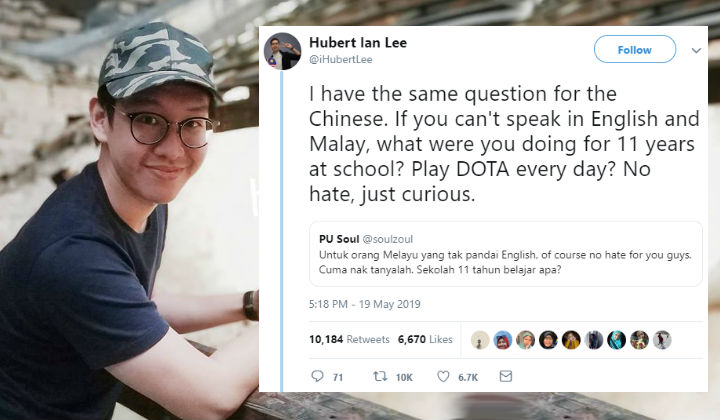 Just a week after Twitterjaya discussed speaking in a common language when part of a group, Twitter was again lit up with another discussion about why some Malaysians only stick to using their mother-tongue.

Twitter users Hubert Ian Lee and PU Soul posed a question for their fellow Malaysians, asking why they struggle with the common languages they should have learned in school.

I have the same question for the Chinese. If you can’t speak in English and Malay, what were you doing for 11 years at school? Play DOTA every day? No hate, just curious. https://t.co/QnSIa2uimt

The most common answer was that certain communities (regardless of race) are active in their own small pockets within the country, which makes it easy to only stick to one language and disregard the rest.

As communities tend to be more segregated and we tend to live in our own bubbles, it is not uncommon to find those who cannot converse in Malay due to extreme lack of use for the language, especially when your workplace is Chinese-centric.

personally kn,i grew up in typical malays environment yang judgemental. so even if u studied at school yang ajar u english,if your surrounding is not convenient to learn & practise english,u will ended up nothing so my opinion is u r the one yang kenal pandai sesuaikan diri 🙂

However, netizens were quick to point out that many people pick up the language on their own, so the environment is not entirely at fault.

i knew peeps from highschool who are REALLY good in English altho in school they only speak in Malay all the time. They practiced on their own. For me the Internet helps a lot, from video games, movies and songs. It’s all effort, not your environment.

Iâ€™m chinese, brought up speaking in mandrin, then proceeded to enroll in a chinese vernacular school, honestly itâ€™s whether you have the drive to learn, you can learn conversational skills through the tv and read to widen your vocabularies and get better at grammar

When contacted, Hubert told us that the discussion helped open his mind.

He also learned that customers often ask people in the hospitality and service industry to speak in a different language or call a colleague who does.

Hubert concluded that people are weak in other languages because they don’t practice it, often due to their social circle or the lack of importance of other languages in the workplace.

He also urged us to mix with people of different cultures and races to expand our worldview.

Ease of language comes from constant use, so consumption of media in many languages certainly helps to make people more comfortable in other languages.

So the next time someone complains about you watching too much TV, tell them you’re practicing your language skills!