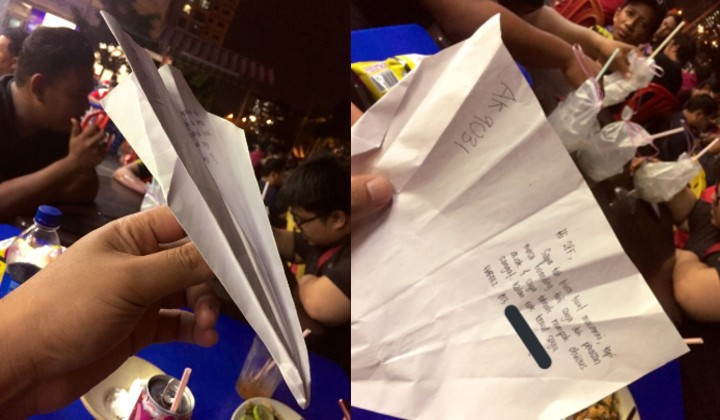 A Twitter user posted about an incident that happened as he and his wife were seated separately on a flight from Johor Bahru to Kuala Lumpur.

His wife, who was sitting in the seat in front of him, was passed a box of chocolates and a note by the stewardess.

The note was folded into a plane and in it was written a brief message and a phone number.

Hi, I don’t usually do this but I think when we were boarding, I noticed that we didn’t want to be too obvious. If you want to know me, HAFEEZ, 013 ——–

It was a love letter from another passenger on the plane.

Too bad he made a try for a woman who was already married to the guy sitting behind her, though her husband had a good chuckle about it.

However, denizens of Twitterjaya are applauding the would-be Romeo’s courageous attempt and are wishing Hafeez good luck in finding a soul mate.

Even the airline chimed in to offer prayers for Hafeez and reminded him there are plenty more fishes in the sea.