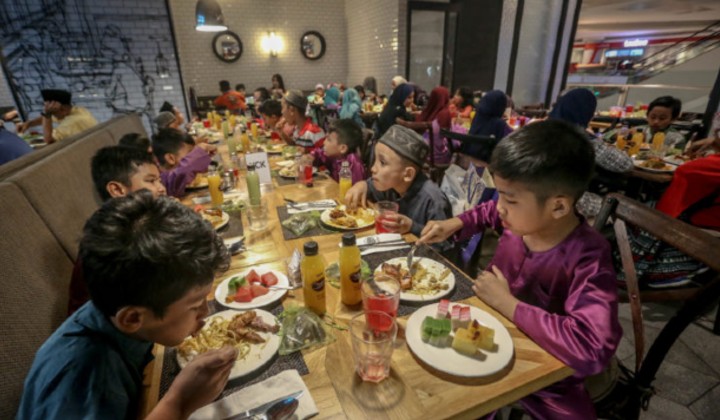 Even though only Muslims are obligated to fast during their holy month of Ramadan, Malaysians across the country will come together and face some of the same issues, like…

Non-Muslims will show unprecedented levels of concern for their Muslim friends’ psychological and emotional state during the lunch hour.

And then in return, those Muslims friends will play it off as if fasting is the easiest thing in the world (after the first day, anyway).

2. Shifting working hours ahead for a month

Many offices, private or government, will shift their opening hours a little earlier during the Ramadan month, epecially if majority of the staff are Muslim.

Not only are most of them already awake in the early morning, shifting work hours ahead will also allow Muslims plenty of time to leave earlier to buka puasa at home.

3. Leaving work at 5pm and sitting in traffic jams till 7pm

Because of point 2, traffic jams would already be in full swing by 5pm because Muslims will be rushing home to prepare to berbuka and some non-Muslims don’t want to hang around in the office alone.

People who are prepared will know that this is the best time to keep food in the car.

4. Restaurants filled with people NOT eating the food on their plate

Every evening, starting around 7pm, restaurants will be filled with people sitting at tables of food and just waiting for the signal to eat.

This applies to Muslims and non-Muslims alike who will all be looking for someone else to start eating first.

And then when someone does start eating, everyone else wonders if it’s because it’s time to eat or if someone accidentally started eating out of habit.

Possibly the most recognisable advertisement in Malaysian history is the whispering of “Yusuf Taiyoob” in between a list of their wide variety of dates.

Also, you’ll find free dates every where; supermarkets, petrol stations, restaurants, and even at toll booths.

When else can you you see our social media posts flooded with memes of Ryan Gosling, Edward Cullen or even Robert Downey Jr. asking to berbuka with us?

Last but not least, there’s food wastage especially at the Ramadhan bazaar where people sometimes buy food like there’s no tomorrow.

Even the needy, especially in Chow Kit, are also flooded with packets of food from enthusiastic and well-meaning people who spontaneously decided to donate.

So here’s a Public Service Announcement for all those buying food during the puasa month, remember to have a budget before entering the bazaar and not to over spend.

Regardless of how you will be celebrating this holy month, we here at The Rakyat Post hope you have an enjoyable Ramadhan with family and friends next week.