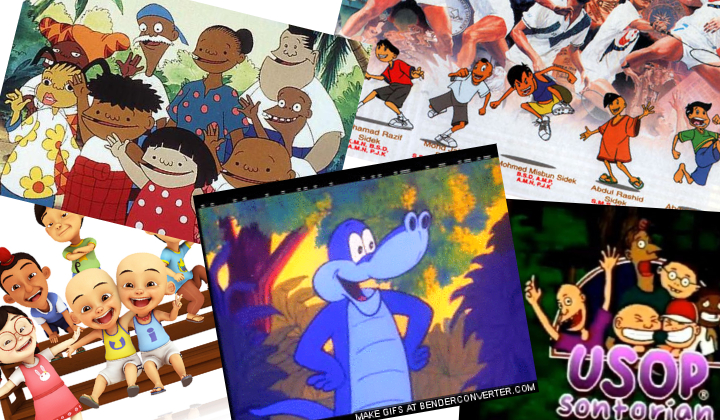 There’s nothing that can really compare with good home-cooked food. Our mother’s fried rice beats a fancy restaurant dinner of chicken with avocado and some type of cheese any night of the week.

Similarly, Malaysian-made cartoons hold a special place in our hearts. Some really are on par with anything else the world has to offer and others, well… We as a people and a country grew up with them.

So here are 5 Malaysian-made cartoons, in no particluar order, that deserve more recognition.

These animated shorts aired on RTM in the 1990s and were based on traditional Malaysian tales. They lasted around 5 to 10 minutes and usually had some kind of lesson at the end.

They were directed by a pioneer of Malaysian animation, Hassan Abd Muthalib and produced by Filem Negara.

Les’ Copaque Production (we’ll come back to them later) have remade something similar with modern animation methods, but these are still a classic.

And someone has uploaded a couple of episodes onto YouTube.

Usop’s friends are Abu, Dol, Ah Kim, Vellu and Singh, but he also has an older brother and sister.

They are based on the comics by the legendary Ibrahim Anon. You might know him better as Ujang.

They were directed by Kamn Ismail and published by Kharisma Pictures Sdn Bhd.

This was a series of cartoons on RTM from 1999 till 2003, based on a family of real Malaysian badminton champions, the 5 Sidek brothers.

Most of the series shows the tough training their father, Haji Sidek, put them through.

Eventually, all that hard training paid off as Malaysia won the Thomas Cup in 1992 and all of Haji Sidek’s sons became badminton coaches.

The series was directed by Shadan Hashim, almost all the brothers were executive producers and it ran for 39 episodes over 3 seasons.

Kampung Boy is the story of Mat and his life in the village and it first aired in 1997.

Aside from Mat, there is the character of his younger sister, Ana, his parents, Yap and Yah, and Yap’s mother Opah.

Mat also has friends; Bo and Tak, Normah, and Mrs Hew who is a teacher.

It was adapted from the best-selling graphic novel The Kampung Boy which was published in 1979 and is the work of local cartoonist Datuk Mohammad Nor bin Mohammad Khalid who you know as Lat.

What you might not have known was that it came about after a conversation between Malaysian tycoon T. Ananda Krishnan and Lat in 1993.

Upin & Ipin is a series of animated shorts produced by Les’ Copaque Production starting in 2007.

Upin and Ipin are twins who live a village with their elder sis Ros and grandmother Uda.

The twins are only in kindergarten and have friends Mei Mei, Jarjit Singh, Ehsan and his cousin Fizi, and Mail.

Other people in the village include Tok Dalang Ranggi, Muthu and son Rajoo, Salleh/Sally, Ah Tong and Susanti.

It started with just 6 episodes on TV9, teaching kids about the significance of the Muslim holy month of Ramadhan.

Did we miss any cartoons? What was your favorite Malaysian cartoon growing up? Let us know on social media.