A national disaster broke her career, but an independent movement reignited her love for music. 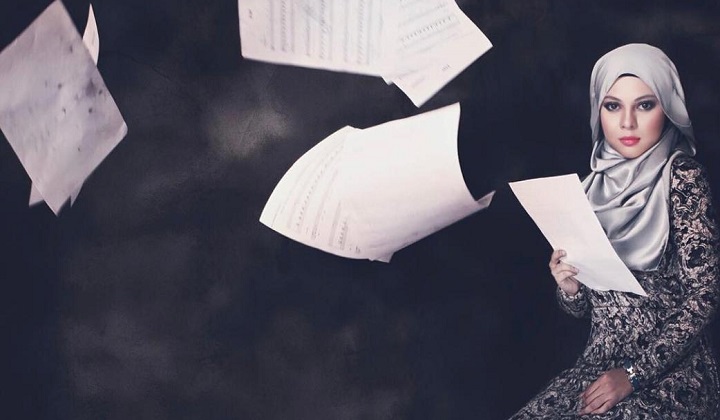 When she first stepped up onto the virtual open mic stage of Nada Music MY in early 2021, no one knew what she was capable of. Her small, almost cartoonish voice and her timid speech spared no hints of her talent. But, when she strummed her guitar and began to sing, the room was stunned.

Although her guitar sounded contemporary, her voice could have stood among the pantheon of legends from the diamond age of music in Malaya. Before independence, before vinyl. Back when phonograph records were made of shellac.

It was the first time 31-year-old Khadijah Cooke picked up her guitar and performed in almost a decade.

She had always loved music and art. Her father was a singer at a pub. She learned to play the guitar from him, after having a hard time trying to learn from a book.

Her fondness for watercolours started when she was in school.

Music was the way she expresses herself and art was how she unwinds. She had the talent for both.

Khadijah sang and wrote songs mainly in Malay. But, when she covers songs in English, she brings to mind Amy Winehouse who in turn, is often compared to Ella Fitzgerald.

Her inspiration often comes by like a pleasant breeze. When she is holding her guitar, her mind would rest on a thought, her fingers would strum a chord, and the words would just appear from her lips.

She was staring at the moon over 10 years ago when she wrote, Bulan, which is now a staple at Nada Music MY.

She wanted to craft songs that evokes memories, recall emotions, and the key to treasured thoughts. She also wanted to perform them. Naturally, Khadijah would become a recording artist, but something unexpected happened that would destroy her dreams.

In 2013 Khatijah Cooke released her first single, Terbang. She was ready to take the centre stage of the Malaysian music scene.

She did her due diligence, going on the talk show circuit, and getting her song played on the radio. She did all the work leading up to 2014. It was going to be her year.

Malaysia was not in the mood for a new star or a love song. He singing career disappeared with her hopes and dreams. Khadijah was devastated.

She disappeared from the music scene.

One of the first people she followed on Clubhouse was composer, singer, song writer, and entrepreneur, Altimet (Ahmad Abdul Rahman). Every Wednesday, Altimet moderates the Malaysian Musicians on CH club in Clubhouse with teacher and guitar maestro, Az Samad.

It was there were Az Samad mentioned that he moderates another club, an open mic called Nada Music MY, with Zee Avi, and Brendan De Cruz.

Knowing that one of her musical heroes, Zee Avi, was there, motivated Khadijah to pick up her guitar, and perform in a slot on one of Nada Music MY’s first shows.

She used the name Cica. It’s what her young nephews and nieces call her. A portmanteau of Makcik and Khadijah. Now everyone on Nada Music MY only knows her by that name and she has been a regular ever since.

On June 4, Cica was the featured act on that week’s Nada Music MY performance.

The whole experience rekindled her passion for music. After all those years, she wants to write again, sing again, and give music another chance.

The pandemic has made it difficult. She does not have a studio set up at home, so she can’t record music during the lockdown. But, once the movement control order is lifted, who knows, perhaps Khadijah would fly once again.

Singer who kept sun bear in condo pleads NOT GUILTY to 2 charges. Bail set at RM10,000