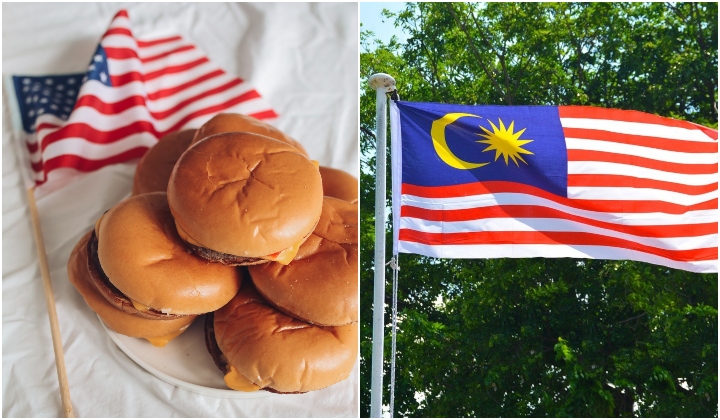 In conjunction with the United States 245th anniversary of their independence day, we thought we’d take a closer look at the relationship between our two countries.

Our differences and disputes, our similarities and common ground, and the dynamic of our two nations over the years.

Ever since our own independence day here in Malaysia in 1957, we’ve have official diplomatic relations with the US. Even that is something we have in common, we both gained our independence from the British empire. Although the US managed to shake the Brits some 181 years before we did.

One can’t help but wonder, looking at our flags – did we a lot in common ? Was that by design ? At the time of our independence, the US was quite the prominent and idealistic nation, espousing American values all over the world, especially in their economic and baby boom in the wake of World War II.

They hadn’t yet become the superpower they are today, but the very foundations of the country from its inception by their founding fathers have always had an idealistic and optimistic disposition.

Did our Malaysian founding fathers admire the America of the 40s and 50s ? They did after all play a significant role in winning the world war, some would say emerging heroically after that chaos and desolation.

These decades in Malaysia definitely had their style and iconography influence by American pop culture. From the emergence of the flower-power hippie movement, to the prevalence of rock and roll, and to the death of disco.

You could see a uniquely Malaysian twist to the American way of life here. Like Batik with bell bottom pants.

We even opened our longest running American fast-food chain in Petaling Jaya, which has been in operation since 1965 – The famous A&W drive-in restaurant, which I’m sure many of us have parents, aunties, and uncles who used to frequent there in their youth.

In these decades our relations strained a bit. Our the Prime Minister, Tun Dr Mahathir (Tun M) severely disagreed with America’s foreign policy, in particular to their presence in the Middle East.

Malaysia was a strong supporter of the Islamic world, and tended to be viewed as a ‘successful Muslim country’ with a strong leader by the global Islamic community.

After periods of extreme volatility during the Asian financial crisis in the late 1990s, under the administration of Tun M, the central bank of Malaysia (Bank Negara) decided to peg the ringgit to the U.S. dollar at a rate of 3.80 in 1998, contributing significantly to Malaysia’s economic stability until it the peg was dropped in 2005.

Personally, I was very thankful for the stabilising of the cost of imports from the US, as American comic books became more affordable in Malaysia.

Lyndon B. Johnson visited in 1966 to garner regional support for the US-Vietnam war.

Overall, I believe our two great nations have been fairly friendly over the years, and as such I think it’s a good time to wish our red, white and blue friends: