His calming ASMR like beats have won him fans globally. 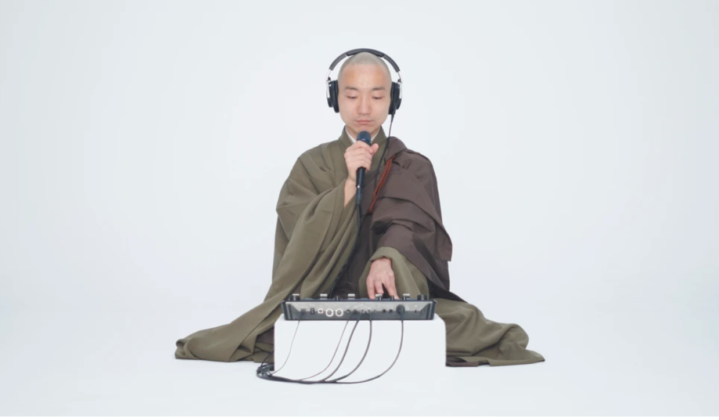 Yogetsu Akasaka is a Japanese Zen monk who has gained online fame for his unique videos that marry his love for music with his love for Buddhism.

His videos frequently feature him clad in a simple buddhist monk outfit standing in the middle of a minimalistic white back drop. He then proceeds to grab a mic, beatbox and perform often times live with a loop machine.

The 37-year-old is best known for his video “Heart Sutra Live Looping Remix,” that currently at time of writing has almost 3.2 million youtube views. His work has been described as relaxing like ASMR, yet engrossing like a DJ set.

“Usually in Japan, people become monks because their family lives in a temple. But for my father, he was just a normal person who decided to become a monk,” he told Vice.

“I was inspired, and decided I wanted to succeed in my father’s current role as an abbot in a temple in the Iwate Prefecture.”

With skillful usage of the loop machine, Yogetsu layers sounds and chants to create his unique style of music. Using only his voice as an instrument and his loop machine he is able to create his ASMR style music that has won hearts from people around the world.

Akasaka was beatboxing even before becoming a zen monk.

“My friend had given me a CD of a Japanese beatboxer named Afra and said that he was performing using his mouth. I was absolutely shocked that people could do such things, and so I was interested in trying it. And then I realised, I was pretty good at it,”

Beatboxing has always been a part of Akasaka’s life. He was busking in Japan, Australia, and even as far as the United States. He was also a theatre actor.

By merging his old life and passion for music with his new one, Akasaka was able to shatter misconceptions about Buddhism. He is also able to perform his chants daily on Youtube, effectively exposing his love for music and religion to all his fans globally.

“I think in Japan, people often associate Buddhism with funerals, and the sutra has a little bit of a negative and sad image,”

“I have had fans tell me that they were able to sleep well and relax due to my beatboxing videos, which is absolutely amazing,” he said.

“I am honoured to be able to combine my passion with my religious beliefs, and that this has impacted people around the world.”

“It Hurts To Say It, But Malaysian ‘Ustaz’ Spoke The Truth”, Says NGO