You’d need to fork out at least RM5,000 to even start– unless you’re on a scholarship. 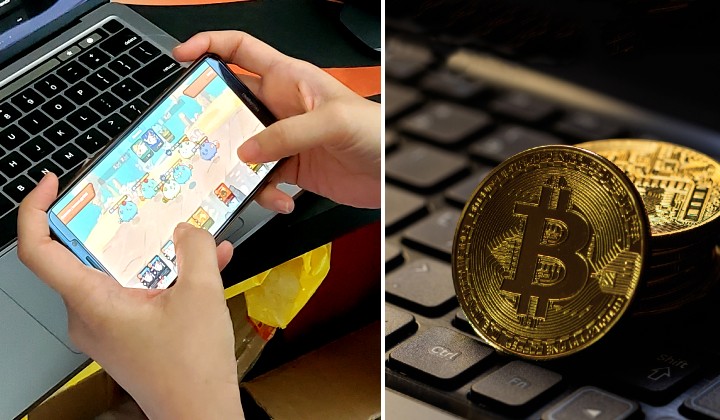 You’ve heard of NFTs (Non-fungible token), which essentially acts as a proof of ownership of a digital asset recorded in a ledger called a blockchain. You’ve heard of cryptocurrency, most notably Bitcoin, which has skyrocketed to popularity in the past few years.

Now, get ready for a whole new frontier that merges the two: blockchain games, which allows you to earn cryptocurrency while playing an online game.

And now, blockchain gaming, also known as cryptogaming, has reached Malaysian shores, smashing open a whole new frontier for anyone to join.

Digital assets and currencies are still very new in Malaysia, and often only privvy to digitally-savvy tech enthusiasts. For the rest of us, it seems like virtual nonsense. What is money if you can’t see it, touch it, or use it? How do you mine Bitcoin? What’s a proof of certification that you own a digital image? Where do you even start?

Gamifying the process makes it easier to participate. People won’t even really need to understand everything (though it would be best to have some basic knowledge), and just go along with it. Like kids who learn the basics from playing on a playground, blockchain games are the playground for adults to play in– and possibly earn some money on the side, too.

While there are plenty of different blockchain games out there, we spoke to Lorcan Gaming, which is opening doors for Malaysians to participate in one called Axie Infinity.

At its core, Axie Infinity is very much Pokemon-inspired, featuring cute creatures that can be bought, sold, and bred. These Axies are the NFTs of Axie Infinity: each one different, unique, and owned. Unlike Pokemon, however, you don’t get a kind Professor Oak to give you a starter Pokemon for free and catch your own Pokemon in the wild.

To take part in the game, each player will need at least 3 Axies, which can be bought on the Axie Infinity Marketplace.

Playing these two stages will earn you in-game currency called SLP (Smooth Love Potion), which can be converted to USDT (the 1-to-1 crypto equivalent to USD), which can be withdrawn as MYR.

So, in a nutshell, the more you play Axie Infinity and earn SLP, the more currency you earn, which can be exchanged for more actual, real money.

An opportunity in the growing gig economy

Co-founder of Lorcan Gaming Joe Kit Yong notes that in the Philippines, blockchain games such as Axie Infinity are already quite popular, with many gamers using it as their primary source of income– a sentiment echoed by the game developers themselves.

This year Axie Infinity’s growth has exceeded all of our internal expectations, with particular growth in the Philippines. That community has quickly embraced the value that play 2 earn games can provide and have build very strong communities to support one another, and onboard others into the game. We expect similar interest to spark in the rest of SEA, especially in Malaysia given it’s a place that so many gamers call home.

Joe likens it to the gig economy, which sees opportunities with a low barrier of entry that opens up avenues for everyone. Unlike esports, you don’t have to be a serious gamer to make some profit. You just need to put in a bit of time.

The game is largely quite easy. You could have a career in gaming without needing to be very good at it.

The barrier to entry

It sounds almost too good to be true, because it is. Upfront costs for 3 Axies start from $1,200 (around RM4,800) for a basic team at the time of writing.

Despite the gamification, these blockchain games are still a kind of investment, which requires capital.

You can’t actually play Axie Infinity for free. You can’t hop on and just “try the first 10 levels”. If you come in not knowing anything about the game or picking a team, even if you have the inital $1,000 investment, you can’t earn any returns. That’s why we started the scholarship, to open up opportunities and provide a form of income for Malaysians.

Thus, Lorcan Gaming was founded. Its co-founders have only met online, scattered in KL, Selangor, and Penang– a fitting sort of structure for an industry that only exists in the digital landscape.

The nearly RM5,000 upfront costs is too much for a majority of Malaysians to afford, especially as our economy crawls tediously through the many lockdown restrictions. The answer to that is to join a scholarship, which essentially acts as the Professor Oak along your Axie Infinity journey, by providing you 3 Axies to start with.

Players that have large Axie collections realized they can’t use all of their game assets, so they started lending them out to other players in need, to then split the rewards.

Scholarship programs are also a key reason for the explosive growth seen by Axie Infinity, as players create a mutually beneficial system that works for newcomers, invested players, and the game itself.

Co-founder Brendan Mak notes that the scholarship is “more than just a business”.

As gamers ourselves who genuinely enjoy the game, we want other people to join in and grow the community. It’s a win-win situation for both the scholarship and its scholars.

The scholarship takes a small cut of SLP from the scholar’s daily earnings, while providing the fully-built Axie teams, guides, strategic help, and other support to ensure their scholars benefit from the game.

Currently, in Malaysia, there are only around a few hundred active scholars as the game is extremely new here– but spots in Lorcan Gaming and other scholarships fill up as soon as a space opens up.

For Lorcan Gaming, we want Axie Infinity to be more than just a job that earns you money– we’re here to build a community of gamers who enjoy and love gaming. At the end of the day, we’re just a scholarship looking to provide opportunity for people to join, chill, and have fun together.

What’s Up With NFTs? [Opinion]