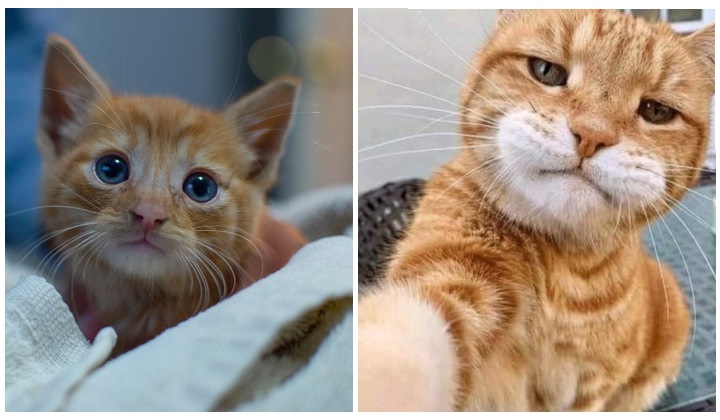 Malaysians have a special way to address ginger cats and that’s to call them “Oyen”.

Although we aren’t sure who first coined the term, it sure is a cuter way to say “oren” (orange) and very fitting when referring to our lovable felines.

And thus, we shall refer to ginger cats as “Oyen” when telling you what makes them such meow-nificent creatures.

Science explains why Oyens are friendlier than other cats

In an article published by Psychology Today by Karen Wu PhD, assistant professor of Psychology at California State University in Los Angeles, the gene responsible for the orange colour is sex-linked, resulting in a much higher likelihood that an orange cat will be male.

A study by Pontier et al. (1995) found that based on research conducted from 1982-1992 sampled from 30 cat populations of 56 – 491 cat from each population, three interesting trends were observed in regards to Oyens.

1. Oyens are more common in rural than urban environments.

2. Oyens are less common in areas with greater mortality risk.

This indicates that Oyens are more likely to engage in risky behaviour which could result in death.

In short, the three trends observed above shows a more risk-taking behaviour in Oyens and suggests orange male cats, due to their dominant status and bold personalities, feel more comfortable with approaching humans.

Other Oyen facts that make 🙀 so special

Although the theory as to why Oyen’s are friendlier to humans relates more to the male, here are some other facts about Oyens in general that make them so special:

All Oyens are considered tabbies, but not all tabbies are Oyens

A tabby is just a pattern on a cat’s coat and there are many breeds of cats that have it like Maine Coons, Persians, Ocicats etc… The one distinct common feature for tabbies are the pattern that resembles the letter “M”.

They are fat cats

Oyens love to eat and are more prone to obesity. One of the well-known Oyens in popular culture is Garfield, a comic strip by Jim Davis that gave orange cats a reputation of being friendly, lazy, fat and loved eating lasagna. But please, DO NOT give them lasagna.

The personality of a cat is also tied to a cat’s coat colour and according to National Geographic, the beloved Oyen is anecdotally the poster child for “most gregarious”.

There are more Oyen males than female

For reasons not fully understood, The Purrington Post reports that 80% of Oyens are male which points to a genetic link between sex and colour.

Their special “ginger” gene, which produces their distinctive colour, is on the X chromosome. A female cat has 2 X chromosomes, and to become ginger, she needs 2 copies of them while a male needs only 1. That being said, there is roughly 1 female orange tabby for every 3 males.

So if your Oyen is female, you’ve been blessed with a rare one. Like I was with Chicken, my Oyen of 16 years who we had to say goodbye to almost a year ago.