The Muar MP said that aid has been given to more than 10,000 families from last year. 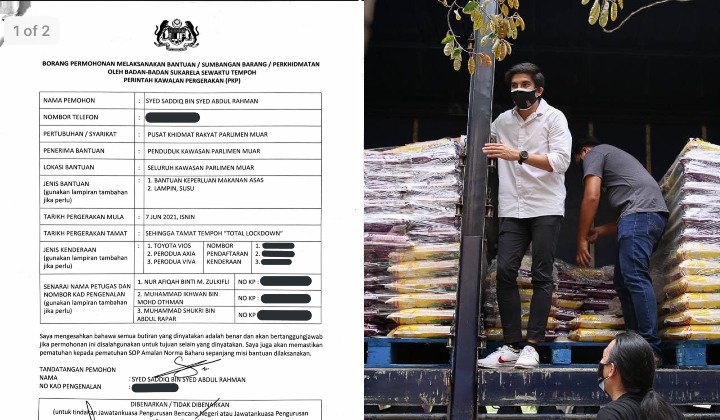 Muar MP Syed Saddiq has hit back on authorities saying that he has the necessary documents to run his food bank donation programme.

In a series of tweets that he posted recently, he said that the Disaster Operations Control Center (PKOB) has already accepted his application since 5 June 2021.

I respect the views of the Johor Police Chief but I have no authority to direct the people of Muar to return empty-handed. If they want to come, they come. Other Parliamentarians do not have this problem, why are there so many problems for Muar to work?

He also said that from last year, his office has distributed aid to more than 10,000 families.

The police have requested that the Muar MP to stop his food bank because it didn’t obtain the necessary permission, besides not complying to social distancing Standard Operating Procedures (SOPs).

Bernama quoted Johor Police Chief Datuk Ayob Khan Mydin Pitchay who said Syed Saddiq only made an application to distribute aid from house to house and not centrally at his office.

He also explained that the order to stop the handover program at the elected representative’s office was made by the Muar District Health Office enforcement, after health officers saw for themselves the program which was attended by more than 100 people, failed to comply with the SOPs.

Ayob also said that Members of parliament or State Assemblymen (ADUN) are allowed to carry out relief activities but need to obtain permission from the district Disaster Operations Control Center (PKOB).

I understand that an application was made but the application was to distribute food baskets from house to house, but what happened was the distribution of goods was made at the Muar Parliament Service Center so many people gathered

It was also reported that the authorities only issued a warning to the parties involved and no compound was issued.