Even his daughter had to come out to say that the family is still in Malaysia. 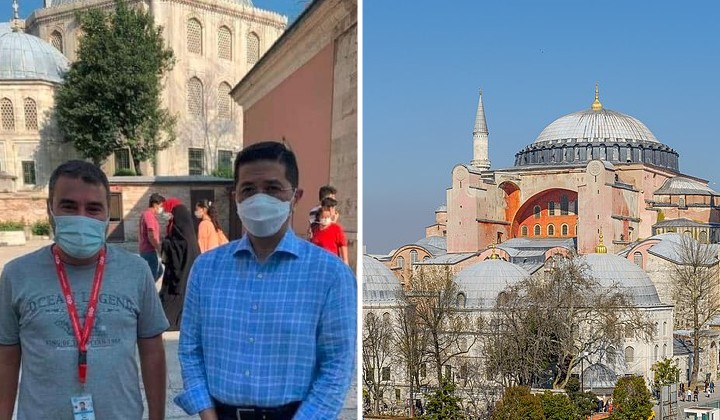 International Trade and Industry Minister Datuk Seri Azmin Ali’s recent trip to Turkey hasn’t been well received by the public who claimed that he went to the country with his family members.

A photo was posted by a Turkish travel tourism agency account along with a caption which allegedly said that the Minister was visiting Hagia Sophia with his family.

This was later changed to: “It was a pleasure to guide for Mr Muhammed Azmin Ali (Senior Minister of Malaysia). He was willing and patient to listen to stories of Hagia Sophia”.

In the picture, the Minister was seen to be standing alone with a Turkish tour guide.

However, The Star reported that netizens weren’t too happy with the change and have shared screenshots with the supposed original caption, which implies that Azmin was there with his family.

The Turkish tour guide account who posted the photo apologised for the caption after assuming that Azmin visited Hagia Sophia with his family.

It’s also clarified that the Minister’s entourage was not his family, but a Ministry delegation on a programme organised by the Turkish government.

Former Prime Minister Datuk Seri Najib Razak has also chimed in on the picture on Facebook, saying that the last time he was in Istanbul, it was for an Organisation of Islamic Cooperation (OIC) conference back in 2017.

In the same post, he said that he didn’t have the time to visit Hagia Sophia and asked Azmin how does it look like up close.

He posted a subsequent post asking why did the “Mrs Muhd Azmin and his family” part was redacted in the next Instagram post by the Turkish tourism agency.

We were not there, says Azmin’s daughter

She tweeted a photo of her siblings in front of a television with the local channel TV3 turned on along with the caption of “I don’t know how else to prove that we are in Malaysia” on Twitter and Instagram story.